The newly created organisation,  United Arunachal Indigenous Peoples Forum (UAIPF) today staged Dharna and protest against the recent statement of Dy CM Chowna Mein on issue of  Permanent Resident Certificate (PRC) as a new year gift for the Non-APST residing in Lekang of Namsai district and Vijoynagar of Changlang district.

Talking with the media  UAIPF Organising Chairman Laffe Paffe said that it is very unfortunate on the part of Deputy Chief Minister Chowna  advocating Non-APST instead of several burning issue confronting the society apart of developmental matters. 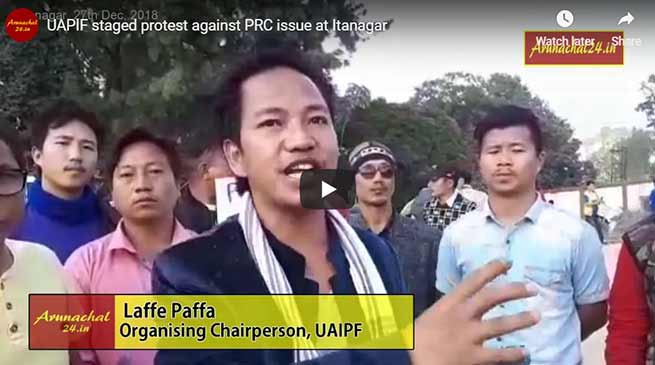 we may become minority in our own state by taking decision to provide PRC of Lekang and Vijoyanagar and some non APST. Large number of non APST are residing in other parts of state, they may also demand for the same. This  is a very sentimental issue which have hurt the sentiment of the indigenous people of state, Laffe added .

This is a political motivated statement ,a and if the Dy CM standstill with his  statement,  we will not sit idle and continue to fight against, he said.

We are not from any political party but indigenous people and compelled to form platform to fight the issue and  soon we will garner support from all likeminded  Arunachalees.  We will soon hit the street and launched a mass democratic movement on this issue.