The party workers to mark the day as Vishwasghat Day (Betrayal Day) by the BJP government had bike rally to show their anguish over the price hike as well as prime ministers promise. The bike rally started from the party office to the Tennis court, IG Park.

“It has been 4 years of BJP government  yet there is no visible impact to development in the state and country, ex chief minister of state Nabam Tuki said on the occasion.” There is no transformation in education, health and connectivity sector. 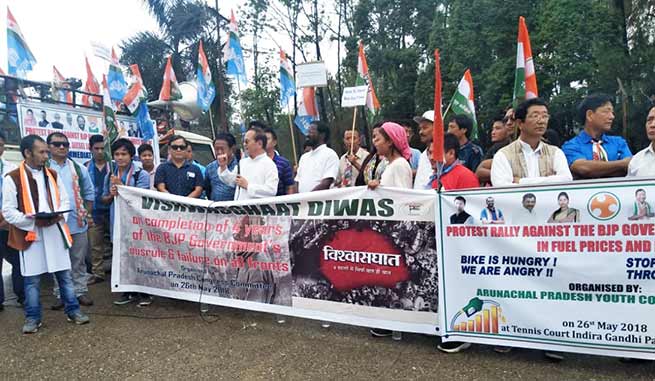 Speaking on the Citizenship (Amendment) Bill 2016, he said the state has always been against The Citizenship Act 1955 and now the state ruling government is silent on it part to make a clear stand on it. This is tribal state and the indigenous people will never welcome the bill to be implemented in the state, Tuki added.

Indian Youth Congress (IYC) Secretary for Arunachal Pradesh Sarifa Rehman said BJP government has been making fool of people from the very day of its campaign. In the name of development, jobs to youth, money transfer to individual account, low petrol and cylinder gas price.

“It is shame that the crude oil is has lowest cost in the international market but BJP government is making benefit out of it, she added.”