Former chief minister , and Sagalee MLA Nabam Tuki  welcomed the  merger of two PPA MLA,  Takam Pario and Markio Tado in to Congress and said that ‘it was a home coming’.

Many will come and join the party as the door of the party is open for all and hope that some more would come to join Congress in time to come. We would also prepare for 2019 shortly, Tuki said.

Tuki was talking to Media on Saturday, after addressing a party meeting at Kheel General ground in Toru Circle in his home constituency Sagalee.

Tuki further said that the congress party have always cooperated the Khandu government in state for all round development. Since last two years Congress maintaining the role of constructive opposition for the welfare  and in the greater interest of people-  said former Chief Minister Nabam Tuki at a congress party meeting at Kheel General ground in Toru Circle amid  huge gathering.

Even in the state legislative  assembly i supported all good works which are in the interest of state and its people but will not keep silence if the state government will go in wrong track then we will naturally oppose its move, He said. 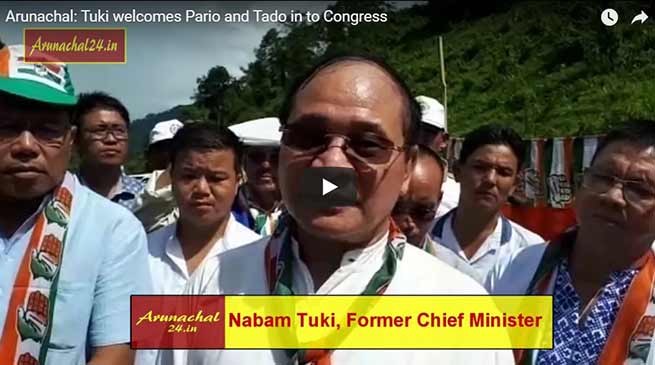 Tuki said that I have been working for the people of state and Sagalee for more than twenty years and never discriminated any one in the name of party and religion. I have been able to deliver goods to the people as in the capacity of youth/party leader, Minister, Chief Minister and even as an MLA.  I have tried my level best for the development of the Sagalee assembly constituency and will continue  in future.

Talking to media Tuki said that this meeting was held after a long gap. peoples  Locals from village, panchayat and rural and urban area of Toru and other parts of the Sagalee sub-division have come to to listen to the leaders in the matter of development and party related issue.

On regards to development Tuki said that many development have taken place in Sagalee and in state as a whole as special economic and development package announced by the former Prime Minister Dr. Manmohan Singh is now seen on the ground and are sign of development. Tuki added.