Arunachal: Mountaineer Tapi Mra Missing- LIVE UPDATE-  Tapi Mra, the first mountaineer of Arunachal Pradesh to scale Mount Everest is missing for the last seven days. After getting the information, the district administration has formed a team, which will go for search operation by helicopter on Tuesday morning to find him and his associate.

WATCH VIDEO- As claimed by the source this is the Last Video of Mountaineer Tapi Mra filmed before he went missing.

East Kameng District Administration in a letter written to Secretary, Civil Aviation, Government of Arunachal Pradesh has requested for IAF Helicopter for search operation of Tapi Mra, Adventure Promotion Officer, Directorate of Youth Affairs, Government of Arunachal Pradesh who went untraceable for several days along with a puroik boy during an expedition trip to Mount Kyarisatam situated in East Kameng district. 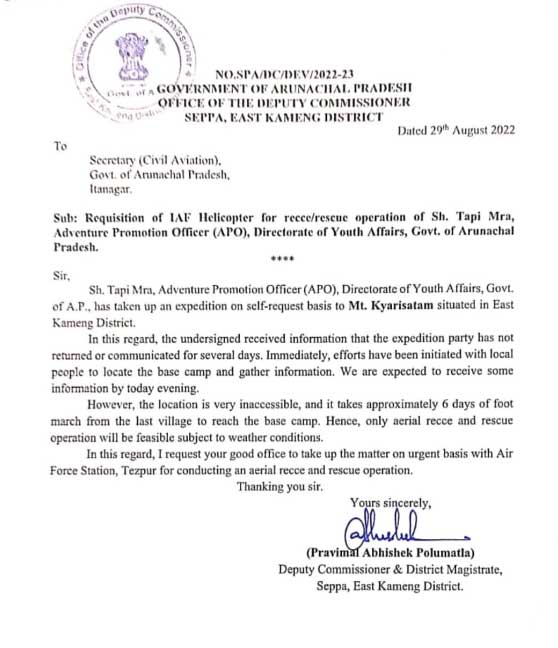 According to Media report, DC of East Kameng district, Parimal Abhishek said that “we got information in this regard on August 26. A climber who returned from illness, returned to the district headquarters and told that Tapi Mra and her colleague Nico Daw have not been in contact for the last five days”.

After this, we immediately tried to find out the geographical location by contacting the people of the last village which falls near the base camp. Because that place is far away from here. After getting information from people, we immediately started action. On Tuesday morning, a team will go by helicopter to search for Tapi and his associate.

It must be noted that “Directorate of Sports and Youth Affairs, Govt. of Arunachal Pradesh accorded to Tapi Mra, Adventure Promotion Officer (APO) for undertaking the expedition to Mount Kyarisatam situated in East Kameng District, Arunachal Pradesh with report back to H.Q immediately after completion of the expedition who had reportedly went missing since last 11 days. This sanctioned on 20th July 2022”.

Tapi was on an official mission to climb Mount Kyrisatam, one of the highest peaks of the state. Tapi Mra climbed the world’s highest peak Mount Everest on 21 May 2009.