The State Board for Wildlife (SBWL) that met here today for the second time under the Chairmanship of Chief Minister Pema Khandu approved the proposal for a comprehensive Red Panda Conservation Plan for the Arunachal Pradesh besides declaring the first community initiated conservation festival – the Pakke-Paga Hornbill Festival – as an annual state festival.

Red Panda, one of the most endangered mammals in the world, habitats the forests of Arunachal Pradesh in presumably largest number in the country. The state boasts of the largest amount of potential Red Panda habitat in India and therefore a conservation plan is being pushed by WWF (India) to preserve the endangered species.

WWF (India) has been working in two districts of West Kameng and Tawang covering more than 7000 sqkm of biodiversity rich areas for more than a decade on community based conservation of forests and wildlife. Red Panda is a major focal species on which wildlife conservation efforts have been focused since they are indicators of the temperate ecosystem. It was observed that despite having more than 1000 sqkm Red Panda habitat under community conserved areas, there exist a much larger scope and need to expand the conservation efforts securing Red Pandas for future. 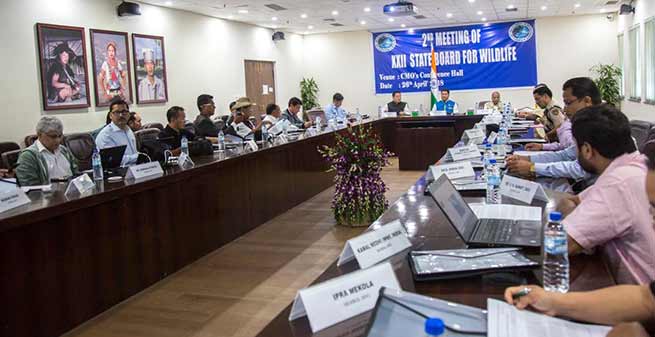 WWF (India) has proposed to develop a state-level management plan for Red Panda based on advanced habitat analysis and stakeholder consultation and ensure its implementation through the state department of Environment and Forests. The plan will be first of its kind in the country and shall set a benchmark for all future conservation efforts for securing Red Pandas on a long term basis.

The Board also approved to celebrate the Pakke-Paga Hornbill Festival at Seijosa in East Kameng district, in the vicinity of the Pakke Tiger Reserve, as an annual event. The festival touted as the only wildlife conservation based festival of the state, which was being celebrated through community participation, will now be taken over by the state government.

Khandu directed the Environment & Forest department to ensure establishment of required infrastructure for celebration of the festival annually and make it a global event.

The Board also approved few other proposals related to wildlife clearance to allow land for construction of roads and defence establishments.

Meanwhile, the Board members discussed in detail the prevailing menace of land encroachment and illegal activities within reserve forests. It was decided that the government will relook at the licenses provided for guns that can be used for hunting wild animals.

The Chief Minister directed the Home Department to study the menace of illegal use of gun licenses and submit a plan to deal with it to the Cabinet. He also directed the department to issue strict directives to concerned DFOs and subordinate officers to physically inspect and check wherever there are complaints of illegal activities in reserve forests. He sought to take a detailed meeting of all forest officers and officials in May next.

He also requested Board Members to take up issues related to their respective wildlife sanctuaries with concerned deputy commissioners. If issues are not resolved at the district level or no action is being initiated on their complaints, they may approach the CMO, he suggested.