Minister of State of Railways  Rajen Gohain and Minister of State for Home Affairs Kiren Rijiju flagged off a new weekly Arunachal express special train from Naharlagun to Anand Vihar Terminal in Delhi at Naharlagun railway station today morning. The Deputy Chief Minister of Arunachal Pradesh Chowna Mein, Lok Sabha MP Nining Ering, senior officials of the Government of Arunachal Pradesh and senior officials of Railways were among hundreds of people attending the flagging off ceremony.

The Minister of State of Railways Rajen Gohain, in his speech, lauded the event as a new dawn in the land of the ray of the Sun (Arunachal Pradesh) and said that the new train flagged off is almost same as a Rajdhani Express except that it was named Arunachal Express.

He said, once all the support facilities for running Rajdhani service like Pit Line etc are completed at Naharlagun, a change of nomenclature may be considered. The Minister said that the Central Government under the leadership of Prime Minister Narendra Modi is taking all possible steps to expedite implementation of railway projects in the region.

The Minister called upon the local youths to take benefit of the ongoing massive recruitment drive in railways. As many as 90000 posts are being offered for recruitment, which will be done through a transparent online process, he said. 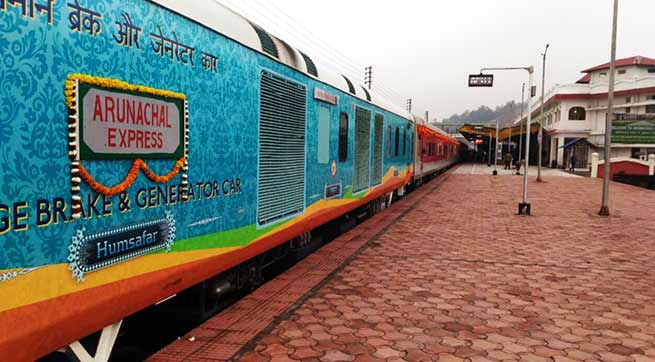 He said that because of issues with land acquisition, the Murkongselek – Pasighat new broad gauge railway line project was being delayed but with the help of the State Government and co-operation of the people the project would be implemented soon.

Gohain also said that the Bogibeel project is progressing as planned and once the project is completed, the distance from Rangiya to Dibrugarh would be reduced by almost 200 km.

The Minister of State for Home Affairs  Kiren Rijiju spoke of Central Government’s eagerness and commitment towards speedy development of the Northeastern region. He said, as many as 11 surveys for construction of new lines are in progress for improvement of rail connectivity with Arunachal Pradesh which will transform the socio-economic landscape of the state.

The new train, numbered as 02411 / 02412, will be called the Arunachal Express and it will be the 14th direct train connecting Northeast with the national capital. The Arunachal Express Special train will have state-of-the-art LHB coaches which are modern and safe. The train will cover the 2103 km distance between Naharlagun and Anand Vihar Terminal in little over 38 hours and will have 14 stoppages en-route. The train will be completely air-conditioned and will have 1st class, Two-tier and Three-tier coaches along with a pantry car.