After announcement of  Arunachal Assembly Election on the first day of checking the capital police have seized cash over Rs. 15 lakh and other items like gun, live round, daos etc.

In a bid to make free and fair and peaceful election the capital police have seized huge amount of cash totalling Rs 15,60,000/–  alongwith other items like guns, live rounds, daos, etc from various persons & places in the Capital Complex for violation of MCC in the first night checking.

Capital SP Tumme Amo in an appeal to general public said that no person should carry such huge cash which would invite  inconvenience .

As per Election Commission of India (ECI)  guidelines that on every seizure of Rs 10,00,000/ and above shall be investigated by Income Tax Dept.

He also sought cooperation from all in case of having any knowledge of possession of captive of any unlicensed arm in the locality for not getting any inconvenience. 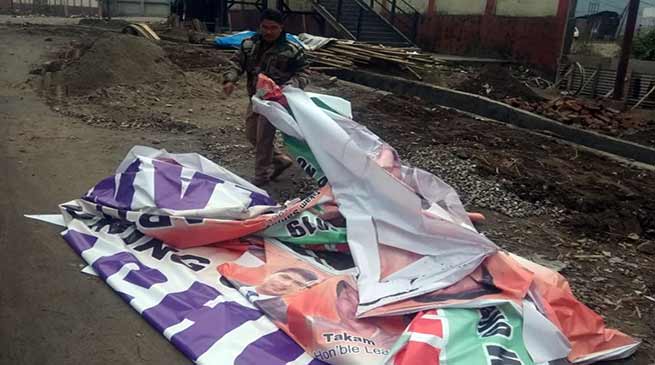 On the other hand the capital district administration after notification of simultaneous election began with removing of all banners,  cut-outs, hoarding etc from several location of the capital complex.

At Naharlagun and Nirjuli the executive magistrate Neelam Teji with the help of security forces and Public premise protection force  (PPPF) today removed dozens of such hoardings, cut-out and banners from several location including high rise building.

The public hoarding carrying images of party leaders, government schemes were also removed in accordance with the Model code of conduct.

Meanwhile the security checking and nakas have been installed at various locations including all entry and exist point of state capital to check any violation of Model code of conduct (MCC).