‘Choekhor festival’ was celebrated in Bomdila  and Tawang of Arunachal Pradesh today in befitting manners for peace prosperity and happiness of all.

After the crops are sown and at the time of little agricultural activity, in the seventh month of lunar calendar, a rite known as “Choekor” is organised in the villages by the entire village community with the aim of offering supernatural protection to the crops sown, for good harvest and to drive away evil spirits. Choekhor of Arunachal Pradesh is celebrated by the Monpa tribe in the West kameng and Tawang district.

During  Choekhor, the village people call up priests or monks from monastery so that they can read the holy books namely “Nyi-thri”, “Gye-tong”, “ka-gyur”, “Bum”, etc. on the last day of the festival, a large rally is taken out carrying idols of Lord Buddha and other Buddhist pantheon and some holy books on their soldiers and circle the whole farm land. 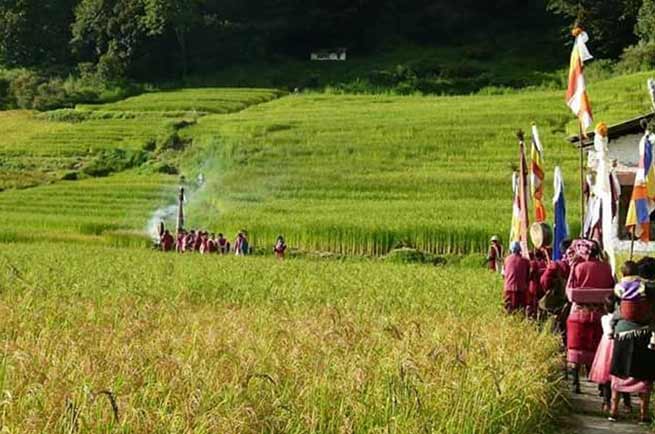 After this the whole procession of Choekhor stops for some time in the fields where the monks recite some holy hymns so as to bless the crops with good productivity. In between all these rituals, tea, popcorn, chang, etc. are offered to the members who have participated in the rally by the villagers.

today’s there were six Kengpa ( Kengpa means a mask men who protect religious book of buddhist from unwanted evils) participated in the said festival who walk around the villages like Pedung ,  sera and more.