It is said that every member of BJP, be it a party worker, MLA or Minister, remain very loyal to their party. Even after winning elections or holding cabinet portfolios, they still remain firmly rooted to their party and help their party whenever the need arises.

This was made all the more evident when BJP MLA Biyuram Waghe ( BR Waghe )  donated his first salary of Rs 1 lakh to the party fund. Biyuram was the former state general secretary of BJP and became an MLA after winning the Bypoll elections last year from Pakke-Kessang constituency. 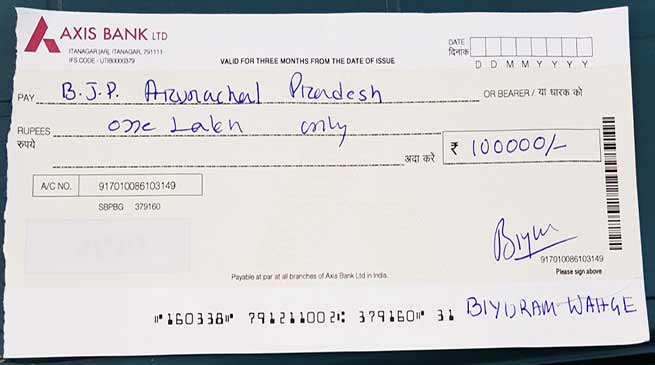 When asked by Arunchal24 about the reason behind his recent decision, Biyuram replied saying that “It is the party that gave me recognition and whatever I am today is because of the party and hence I have responsibilities towards the party as well”.

State BJP president Tapir Gao welcomed Biyuram’s decision and said that his decision should serve as an ideal for other MLAs and Ministers.

On the other hand, several members from the party itself have voiced their displease towards Biyuram’s decision saying that the donated amount could have been used for the betterment of the poor instead.