In the capital city Itanagar every where we can see hoarding, banners, flags, posters and other advertisement materials , which becomes stains in the beauty of city as well as leaves the very bad impact to tourist and visitors comes from another part of the country.  Interestingly there is no one to monitor these activities, even the Municipal Authorities are also never  think about it. However it should be included  as a part of Swachhata Abhiyan.

It have been observed that, Organisation, association, union, parties, corporate body, private organisation and even the government department  has display their  advertisement  poster, flag or banners, before the programme, but  after the over  of the said programme hardly these  flags/banners/posters, cut-outs remove from display sites. 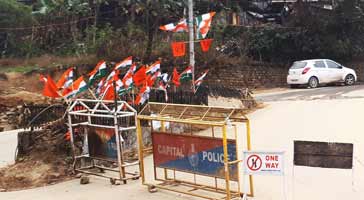 These advertisement materials  spread every where  on road side  like wastage  and remain as garbage and sometime become headache for administration to remove and clean.

Talking to Arunachal24  IMC Deputy Chief Councillor said that ‘all hording, cut outs of corporate bodies and Government and private bodies meant for advertisement were under the district administration but now all these will be under IMC and without permission of IMC no one can display in public premise and open area’.

There is a policy and guidelines for these hoarding which include time frame, fee with permission to displayed in open area through which revenue would be generated for IMC.

Swachh survekshan would started from February 10 to 20 wherein all posters, banners, flags, cut outs will be removed and mass awareness on sanitation and cleanness would be done in the capital complex. Nachung said.

All such banners, flags, hoarding for a programmes with permission need to be removed after their programme is completed, but those banners, hoarding which are displayed in the interest of public service and mass awareness shall be allowed to continue.

He however said he will direct his officials to start removing all such banners, hoarding, flags and other which are defacing the capital complex.

He further appeal all the citizens of capital complex to get permission from the IMC for displaying any such banners, flags, cut outs, posters and other or else it old attract legal action from the administration as per law prevail in the policy and guideline.