A three days Annual sports meet kick started  VKV kharsang today where students have been divided into four groups namely Subansiri, Kameng, Lohit and Siang. The sports meet was declared open with the unfurl of Annual winter sports meet flags by the principal Mr. Shyamal Chakraborty today at 9.30a.m at VKV school ground in presence of the staffs and the students.

Class I to class II have been graded as Kids , class III to class V as sub junior, class VI to class VIII as junior and class IX to class X as senior group. This institute is committed to shape the posterity in main five areas as mentioned below which is the full fledged foundation for a person to become successful in lives. They are Intellectual, Emotional, Mental,  physical and  Spiritual development. 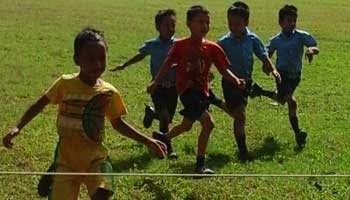 Various athletic games were conducted on the day one of the meet. At the back drop of overwhelming contribution towards man building, this vkv school stand tall among hundreds of schools across the Northeast which is one of the best rated school in the district as well which started in 1977 by then the founder of the famous Vivekananda rock memorial at kanyakumari with the vision to uplift the educational standard in the North-eastern region. This school had shaped the lives of many students and needless to mention, many of their alumni has become IAS officers and other allied officers apart from uncountable APCS achievers. Vkv kharsang is one of the first schools started in 1977. It is committed with the ideology of man making and National building by imparting the students through value based educations. Many students have cracked IIT’s and Civil services since the inception of the institute many decades.

This institution stands on the ideology of swami Vivekananda who advocated to pursue both western and eastern style of educations whichever pays off well for making a person to be a complete human being in the society. The institute in itself is well disciplined and robust in its educational and extracurricular structure. This is a government aided institution which have been playing a pivotal role in bringing a change in the society. It really abide by the norms laid down by the ministry of Education full filling the RTE Act 2009 criterion. Beside this, the VkV kharsang have been found to be one of the school that provides a hygienic mid-day meals for six days a week.
This annual winter sports meet will culminate on 5th November but the prize distributions will be organized on 19th November which is fortunately falls on the 103th Birth anniversary of Late Eknath Ranade the founding father of the Vivekananda Kendra Vidhyalaya. 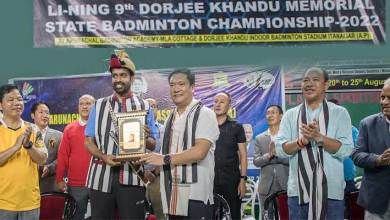