Addressing the first official meeting  with the officials of forest department on Saturday Chief minister Pema Khandu appreciated the role of  Arunachal  Tribal Society in preservation of forest and environment. He said ” All our tribal activities, rituals and practices are deeply connected with the forest and its natural surroundings.” 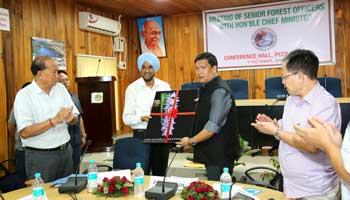 Khandu chaired this meeting of senior officials from the Department of Environment and Forest (DoEF) along with Parliamentary Secretary for Forest, Chow Tewa Mein here at PCCF office.

The Chief Minister in his opening remarks recalled the department’s ‘golden era’, when it contributed massively to the state’s revenue. He, however, observed that in due course of time with 1996 Supreme Court’s ban on timber operations, the status of the department has been relegated to service department from being a revenue department once.

The CM, nevertheless, admitted that the Supreme Court’s judgement was “right”. “We have to admit that the judgement might have hurt us in short term but in long term and for future, the decision was absolutely correct and in right vision,” he said.

Also the service provided by the forest department could not be compared with other departments, said the Chief Minister and added, “Their contribution not only benefited the people of Arunachal, but the entire human race. The effort to preserve Arunachal’s green cover in itself is a great service towards world environment.”

He took pride in the fact that the community’s cultural practices had contributed to preservation of forests due to which the state still has 81% of its land under forest cover.

However, acknowledging that with rapid development, forest encroachment was proving to be a big challenge for the state government, the Chief Minister assured the department that the issue will be taken not only at department level, but at all government levels.

He assured that the matter of raising manpower, which has been pending with the department for last 15 years, will be taken up with the Prime Minister in his forthcoming meeting with him in New Delhi.

Also, the PM will be briefed on the need for state’s own separate cadre for Indian Forest Service (IFS) and IAS, which would boost the innovative and administrative capabilities of the department, assured the Chief Minister.

He appreciated the efforts of the two IFS officers posted in Arunachal on probation, who had come up with a ‘field manual on GIS application for e-greenwatch’, which was earlier released by him.

The Chief Minister also inaugurated the release of website for state’s Environmental Information System (ENVIS) ENVIS (http://arpenvis.org.in) that would help state’s environmental issues to be linked with a central database for easy retrieval and integration of information.

Also speaking on the occasion, Mein suggested that forest department could take up various tourism sites and projects, tea-coffee plantation projects; as the department with its adequate resources will be able to manage those projects effectively.

Terming ‘bamboo’ as the most potential forest resources highly valued than the timber, the Parliamentary Secretary asked the department to engage in research and development to boost its productivity.

He also raised the critical issue of elephant menace in various districts, which has been on rise due to the loss of their natural habitat and termed it as burning problem that needs to be addressed.