The Governor, accompanied by First Lady of the State Smt Neelam Misra and State Home Minister Kumar Waii paid obeisance at the Vihara on the occasion.

Conveying his greetings to the people on the auspicious occasion, the Governor said that the teachings of Lord Buddha are relevant in equal measures even today. His messages of peace, knowledge, non-violence (Ahimsa), upliftment of downtrodden and freedom from superstitious are the promoters of the modern welfare societies.

Quoting a message of Lord Buddha, i.e. Health is the greatest gift, contentment the greatest wealth, faithfulness the best relationship, the Governor said that Lord Buddha’s teachings cover all aspects of life and cares for the last individual in last social rung of the society. 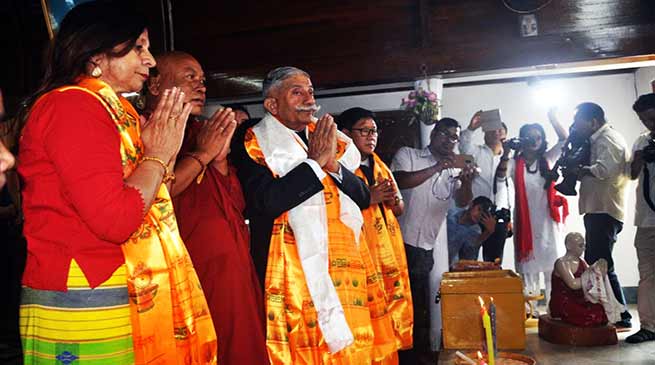 The eight parts of the path to liberation are the essential elements of Buddhist practice, which include moral conduct, mental discipline, and wisdom, which is the promoters of the human deliverance, the Governor said.

The Governor, while sharing his association with Buddhism which started at early age quoted Prime Minister Shri Narendra Modi, who says that India is blessed to have given to the world the invaluable gift of Buddhism, which has today spread throughout the world.