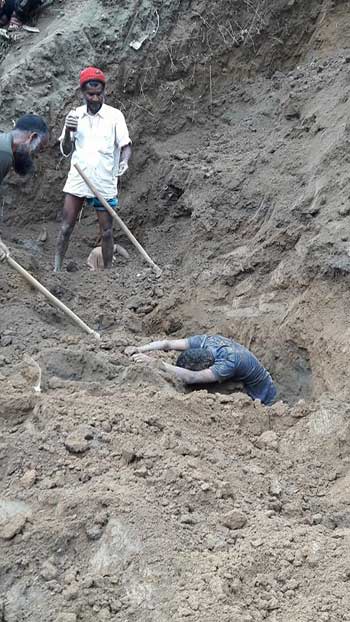 Chief Minister Pema Khandu has expressed shock and sorrow over loss of three lives due to landslide at Palin under Kra-Daadi district. Reportedly, all the three-deceased hailed from Lakhimpur Assam and were engaged in construction of a retaining wall while the fateful incident occurred.

Three persons, all construction workers, were killed due to landslide in Palin Town of Kra Daadi district on Saturday . The mishap occurred around 9.30 AM when labourers were buried alive due to sudden slide of heavy landmass while constructing a retaining wall of a private residence. All the bodies have been recovered within 2 hours of incidence by joint operation of District Administration, Police, Army and Villagers. The deceased were identified as Noor Haque (35 Yrs), Alias Ali (35 Yrs) & saiful Islam (40 Yrs) from Lakimpur, Assam. Proper codal formalities as per law were maintained during Magistrate inquest and bodies have been handed over to the relatives of the deceased on their request.

Chief Minister announced ex-gratia relief to the next of kith of the deceased as per the admissible norms and directed DC Kra-Daadi to do the needful. He conveyed his deepest condolences and extended solidarity with the bereaved family members.

While appealing the people to be cautious during the rainy season, Khandu said that Arunachal Pradesh is prone to natural catastrophe so every measure has to be taken to avert casualties and loss of livestock and properties.