The CM, on the occasion, asserted that he had given words last month that the bridge would be completed at the earliest and had directed the PWD to get it ready accordingly. The urgency for the completion of the bridge was due to its importance as an alternate route during the emergency and peak hour.

“The opening of the bridge comes as major relief to the people as it will de-congest the main Itanagar city route NH-415 and rid it from frequent traffic jams,” said the Chief Minister. 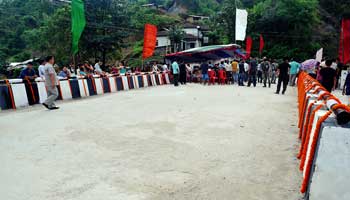 The CM said more such bridges and culverts would be constructed to facilitate flow of traffic and people across the two sides of the valley wherever passages and roads are built.

“This will benefit the people as they will have the multiple options to choose from alternate routes available decongesting the main city road,” said the Chief Minister.

He further informed that the state government is planning to decongest all road networks in the capital city by building more such bridges and culverts across the rivers. A bridge at pachin colony is coming up to connect with medical college campus. An alternative road near Naharlagun helipad is on anvil and a bridge in Jollang village will help smoothen the traffic, said the Chief Minister.

Also referring to the delay in completion of Abotani Bridge, the CM said lack of proper focus and planning is the main cause. “There should be no delay in funding and a proper monitoring system should be in place with clear work deadline,” he said.