Reiterating immediate cancellation of proposed 10, 000 MW dam at Upper Siang, the Siang Indigenous farmers Forum (SIFA) on Tuesday accused state govt for intentionally overlooking the sentiments of communities inhabiting alongside the Siang River aided by  environmental concern raised by environmental activists since last one year over the proposed dam.

The forum which has been rigorously protesting are worried about its  possible impacts on environment, social and threat it caused to downstream areas once the dam is build in Mighty Siang River at upper Siang.

Informing  about the assurance given by present govt to solve the stalemate over the dam with power developers in a meeting held on December last year, Secretary, SIFA, Tasik Pangkam in a press conference however resented that no action has been initiated so far.

“It is also unfortunate that no elected legislatures of the affected areas seem concerned about safe guarding the lands and lives of indigenous populace despite knowing that its people would have to bear the brunt of adverse environment hazards once the dam comes up, he added. 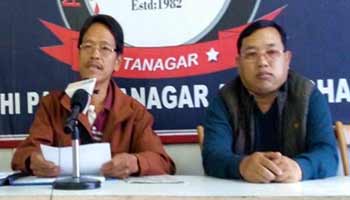 “If this dam is constructed, all living organism in the vicinity would perish,” Pangkam said adding that the so called development project comes at immeasurable cost when considered in terms of the displacement of lakhs of local populace, besides annihilation of forests, biodiversity and its fragile ecosystems.

Giving an overview of the project, Pangkam said that the said proposed dam with 300 meter height walls would buried the whole District headquarter, Yingkiong under water including the downstream  lands in Assam thereby forcefully displacing out people from their ancestral lands.

Armed with RTI documents, Pangkam also sought explanation from government on white paper that where it spends an amount of 200 crore, out of  250 crore sanctioned by the NEEPCO as an upfront or procession fees for the stage (II),(3750)MW mega dam project at Upper Siang.

He claimed that the forum possessed a challan receipt payment of 50 crores which was deposited to state exchequer on May, 2013 last by NEEPCO regarding the stage (II) project, which they obtained from Projects manager of NEEPCO at Yingkiong on September 2015 last.

Pangkam also alleged that the decision was taken without conducting any public neither hearing nor constituting a social impact assessment Committed to assess the public views and opinions.

He said that the proposal was dropped by previous government led by Nabam Tuki following stiff resistance made by the locals, but again renewed by present govt-the reason best known to them.

Affirming to go to any extent to save its lands, Pangkam said that  government cannot force the project on tribal as the dam site falls in tribal area and it is upon the our people to decide whether to allow it or not.

He alleged without any prior intimidation the power developers attempted to run their trucks through peasant’s lands to open roads, to develop infrastructures for the said project and applied dirty tricks to move the dam forward, but later forced  to stop the construction works  after locals intervened.