Three Black-necked cranes had landed earlier this month at this wintering ground for nearly a couple of weeks, later three cranes landed, but  the number has increased to seven now. As per locals, this year the number of these rare visitors may increase more than the previous years.

The Black-necked crane prefers meadows, wetlands, marshes for breeding and nesting. Besides Arunachal Pradesh and few sites in Bhutan, the crane is a resident of Inner Asia regions of Xinjiang, Tibet as well as Chinese Proper provinces of Sichuan, Yunnan and Guizhou. Such landing of the rare birds is also seen in Jammu and Kashmir.

This crane is a medium-sized crane found in Asia and breeds in Tibetan Plateau and remote parts of India and Bhutan. It is 139 cm long with a 235 cm wingspan and it weighs 5.5 kg. It is whitish-gray, with a black head, red crown patch, black upper neck and legs, and white patch to the rear of the eye.

It has black primaries and secondaries. Both sexes are similar. Some populations are known to make seasonal movements. It is revered in Buddhist traditions and culturally protected across much of its range. A festival in Bhutan celebrates the bird while union territory Ladakh has designated it as the state bird. 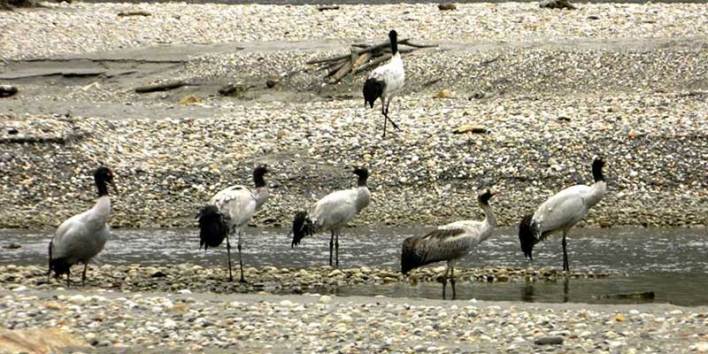 Human activity disturbs their quiet habitat: Sightings of the black-necked crane, once regularly spotted in Sangti and Zemithang Valleys during its non-breeding time, have drastically reduced. Both locals and state officials comment on the rise in human settlements, power grid construction wires, hydroelectric projects that cross the bird’s wintering sites, Bikash Kumar Bhattacharya & Rini Barman wrote in Mongabay on 02.06.21.

The region’s changes in agricultural practices including a shift from paddy to maize cultivation happen to endanger the habitat of this bird. Experts state that marshy wetlands are its primary feeding site, increasing pressure on the land leads to competition and this hampers the space for the birds.

Free-ranging dogs, stone cutting noises, quarry, rising visitors and photographers chase the Black-necked cranes away. Moreover, the increasing temperatures are interfering with their wintering schedules as they come down to the valleys during the harshness of winter.

Locally known as Thung Thung Karmu, the Black-necked crane (Grus nigricollis) is not simply a bird but an emotion for the inhabitants of Sangti and Zemithang valleys of Arunachal Pradesh. It is deeply tied with the region’s folklore and it is believed to be connected with the incarnation of the 6th Dalai Lama in neighbouring Tawang among the Monpa tribes. In 2017, a few monks from Tawang Monastery visited Zemithang, located about 90-km from Tawang to register their protests against the illegal mining activities that threatened the arrival of the cranes. The same year, two birds also died of electrocution when they hit high voltage wires. Three years later, there still remains a lot to be done.

The Black-necked crane is enlisted as ‘near threatened’ in the International Union for Conservation of Nature (IUCN) Red List of Threatened Species. The global population is estimated at around 10,000-10,200 individuals as of 2014, roughly equivalent to 6,600-6,800 mature individuals.

Though they haven’t found any hatchlings, the locals of Sangti and Zemithang Valley say that the Black-necked cranes prefer the valleys as wintering habitats due to moderate temperatures. The Black-necked crane is known to breed in high altitude wetlands and marshes of Tibetan Plateau (Tibet, Qinghai, Xinjiang, Gansu); Sichuan (China) and eastern Ladakh (India).

No more frequent sightings: Pem Norbu Bomiyakpa, 30, a resident of Sangti Valley, says one winter about eighteen years ago the villagers saw as many as eight Black-necked cranes in the paddy fields near his farm. “But the number of cranes visiting Sangti has declined to three or four individuals over the years. And their visit has become irregular. We don’t see the birds every winter.”

Locals and conservationists in the region attribute these developments to a plethora of factors: changing agricultural practices; climate change; and anthropogenic activities in the form of infrastructure development, expansion of settlements that create disturbances in the bird’s wintering habitats.

As a wintering site, the Black-necked cranes mostly rely on paddy and wetlands. A study analyzing the deteriorating former wintering sites of these cranes in Bhutan points out, “In traditional farming practices, fallen grains of barley and paddy are left in the fields after harvesting in early winter, and these were described as providing important food for cranes. With development, the land area under agriculture has declined, reducing food availability.”

For Sangti and Zemithang, changes in agricultural practices including a shift from paddy to maize cultivation, happen to endanger the habitat of this bird. Even in places like Ladakh where hillslope pastures are decreasing and locals are compelled to graze their yaks around paddy fields, there has been depletion for food availability of the endangered bird.