The Trans National Highway ( TAH ) was on Wednesday blocked for traffic movement at several places due to a landslide triggered by relentless rains.

Hundreds of passengers from various parts of state specially on route of Trans Arunachal Highway (TAH) were stranded for hours together due to road blockage and landslide triggered after torrential rain last night.

Commuters said that the road got blockage at the same place where passengers always stuck near Kala Mati on the spot on stretch between Hoj-Potin during the summer.

The Itanagar-Naharlagun road via Jully also got blocked early this morning where previously thousands of vehicle were stuck together near Pagatara due to overflowing of the rain water on the road due to chocked hum pipe which was not been cleared  for several days and due to which the road got blocked often.

Kimin OC K Kommo inform that the Kimin- Potin road in Papum Pare district has also got blockdge due to massive landslide. The blockdge and damage of road has taken place at 18 KM point from Kimin and all vehicular traffic toward Lower Subansiri district has beej badly affected.

The man and machine of GREEF have been engaged to clear the debris and alternate aub way would be created for which formation cutting already started.

The sub way is expected shortly and hope traffics may be restored by a day or two. OC added. 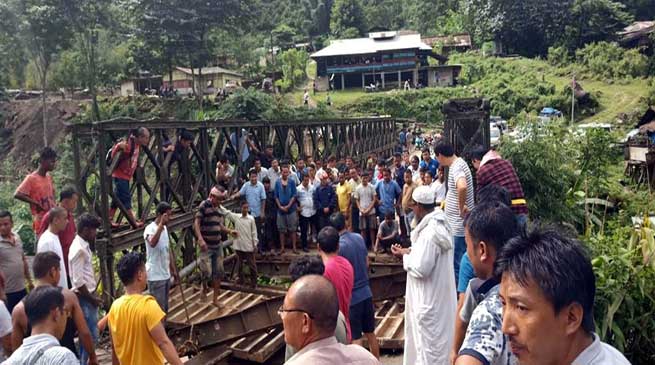