The boundary wall of Inter State Bus Terminal (ISBT), Lekhi collapsed reportedly on Wednesday morning due to heavy flow of flood water; subsequently 6 houses were destroyed by the force of water and mud.

Kojum Docha, a local resident informed that the water flow inverted towards the residents after the wall was collapsed. “Six houses were completely destroyed due to the inwards flow of water from the broken wall, and the ISBT authorities have stopped clearing the mud form the nallah,” stated Kojum.

He said that the affected families are all daily wage earner who work for their daily bread and many properties and cash were destroyed along with the houses. “One woman residing with her children, gone back to Assam after destroy of all properties by flood water, added Kojum.

“I hired Earthmover (JCB) from our pocket and diverted the water from entering toward my house, but the daily wage earners have no money to even hire a JCB to divert the water,” he said adding that many of the wage earner families are living with full of water and mud. 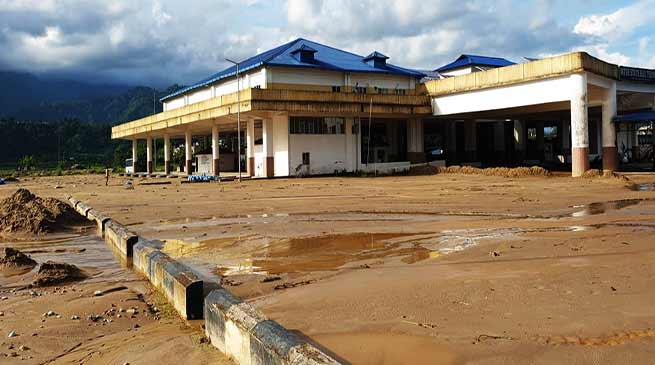 He also stated that ” they have requested the ISBT authorities to clear the mud from the stream like before, but have stopped clearing once the wall was collapsed.

Meanwhile, Likha Taro a staff from ISBT said, “Even if we clear the mud during daytime, the place will be flooded with water and mud again in the morning. It is the same routine every day,” he added.

However as of now the several parts of the ISBT is still flooded with mud and flood water and the commuters and passengers have to face lots of problems. The locals inform that the Minister alongwith several top officers have also visited but no proper action have been still initiated so far and the same condition will continue if proper repairing and cleaning work is not taken up.