Speaking to the several students from Jawaharlal Nehru College, Pasighat attending the awareness programme, Joya Tasung Moyong alerted the youths to understand the actual logic behind the conspiracy to put the youths of Arunachal Pradesh into drug addictions by some external forces with the help of some drug mafias around. “We have been fighting the war against drug menace for several years by now and our only aim is to save and protect our youths from falling prey to drug addictions.

Today almost every household in East Siang district has a drug addict and the number of addictions is increasing and this has to be fought strongly by the youths. It was only after working with Assam women group along Assam-Arunachal boundary while chasing and routing the source of drug supplies we came to know that there has a hidden international agenda for victimizing the youths through drugs by external forces from Bangladesh, Myanmar and China”, added Joya Tasung Moyong appealing youths to play a proactive role in creating serious awareness among the youths to shun drug addiction and to stay away from it.

Secretary, Youth Empowerment, Anirudh S. Singh while admiring the noble work of WASE team in fighting against the drug menace urged the youth present in the programme to take a proactive role in saving and protecting other youths who are falling prey to drug addictions. He said that the state has several avenues and opportunities for youths opting sports and youths need to take up sports as their career option besides studies, as concentrating on sports will deviate the youths mind from getting attracted to drug addictions.

The legal awareness on youth empowerment and drug abuse was led by Oyar Siboh, President of Divya Sanskriti with the support and assistance of Kato Tayeng, Asst. General Secretary of JN College Students’ Union. 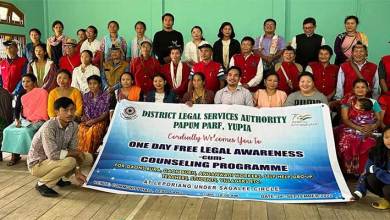