Capital Bandh- LIVE UPDATE Stone pelting in Ganga market: The 12 hour capital bandh called by ANYA (All Nyishi Youth Association) has paralysed life in the capital complex on Friday. Bandh begins from 5 am and will continue till 5 pm.

The bandh called by ANYA pressing various demands including suspension and arrest of then top officials of Arunachal Pradesh Staff Selection Board ( APSSB) who were relieved from their respective posts after APSSB fiasco.

12 noon: Hea y deployment of police and para military forces is being witness in the entire capital complex in view of the 12 hours capital bandh called by All Nyiahi Youth Association

11 am: Almost all the financial institutions shut down their shutters. The roads in capital complex seems deserted as few emergency vehicle with patients and Ambulances are plying on the roads.

10 am;-  The shut down have a visible impact as market remain closed in twin capital city of Itanagar and Naharlagun

9 am:- shops are closed in Ganga market, all shopping malls are closed, passengers stranded in Naharlagun railway station.

8 am:  However, essential services including ambulance , para military and Magistrate vehicles are exempted from the purview of bandh.

7 am:  The roads of the capital complex including National Highway 415 wore a deserted look as commercial and private vehicles were off the roads. Major  business establishments, petrol pumps, financial institutions,  were closed.

6:am :  The ISBT wore a deserted look due to the bandh. At Naharlagun Railway station, Donyi Polo train passengers were stranded. 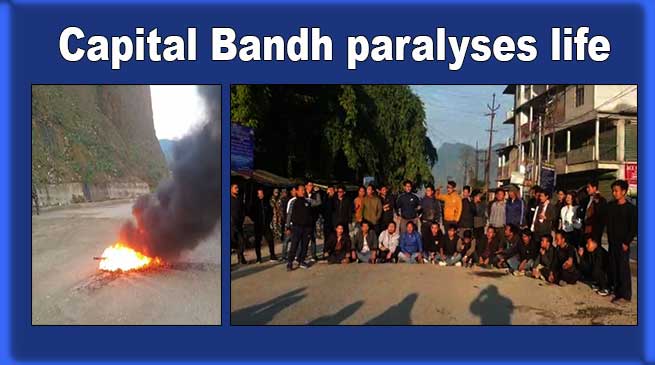 Meanwhile, capital administration has made elaborate security arrangement to defy the 12 hours capital bandh call given by the ANYA on Feb 28.

City SP Incharge J K Lego said that all necessary arrangement has been made to maintain peace and tranquility in the entire capital complex. Security has been intensified dividing the capital complex into four zones.

SP further appeal all the bandh callers not to breach any security and disturb the law and order of capital otherwise the law will take its own course of action.