All Preparation for the visit of the Prime Minister Narendra Modi on February 15 is being given finishing touch said Urban Development, Land Management and Law & Justice Minister Nabam Rebia.

Rebia said that it  is a happy moment that Prime Minister Narendre is expecting to visit the state. It would his second visit to the state after he become Prime Minister of the country. We are excited and people of state have high expectation from his visit.

Though his visit would be short for a hour or two and he would made important announcement related to the development of state and problems faced by the people. Many changes have been experiencing change in the development and we are fully confident that Modi will leave up to the expectation to the people of state.

The preparation for his welcome is in full swing. The “Dorjee Khandu state convention Centre” is expected to be inaugurated by him apart of other. He said that the name was given after former Chief Minister Late Dorjee Khandu name which was adopted in the recent cabinet meeting. The hall can accommodate more than 1200 people having with all other amenities.

APCC President Takem Sanjoy while welcoming the Prime Minister Narendra Modi said that we have witness him in state once before he assume PM and once after he become Prime Minister. People of state have high expectation from him and hope that he may not give hollow promise. The last central budget before 2019 is in progress and he may able to provide financial package for state as the present government is lying their expectation and hope on him, he added.

Deputy Commissioner Capital Complex Prince Dhawan informed that all preparation for the visit of Prime Minister is almost over and nearing completion and finishing touch are given. PM would be inaugurating few government building which including the state convention Hall of IG Park, dedication of Civil Secretariat Building of E Sector to the state and foundation stone laying for academic Block of Tomo Riba Institute of Health & Medical Science (TRIHMS) of Naharlagun and after inauguration he would address a public meeting at IG Park.

He said that it is pride moment for the people and state that PM is visiting and will address the people..

He said that several briefing and direction have been issued in media and advisory to the people. Ground preparation almost completed, we have constructed sitting arrangement for more than 15 thousand chairs have been arranged, drinking water, fans, LED screens and sound system so that the general people do not face any inconvenient at IG park. Space for general public have also been made and expected that there would be presence of more than 35 thousand people on the occasion. He appeal the general people to obey traffic and other advisory on the day so that no inconvenience is faced to anyone. 12 sector Magistrate and others will be deployed to overseen the public management and other issue on the occasion. Dhawan added. 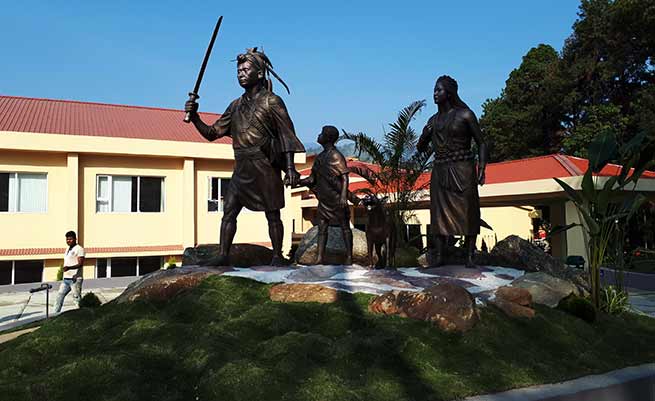 SP Capital Complex Sagar Singh Kalsi who is looking the security related issue informed that a total of 17 company of paramilitary forces have been arranged and will be deployed excluding the security of Prime Minister.

8 SP level officers including 30 officers ranking from Inspector and above have been deployed to oversee all arrangement include crowd management. 4 company of forces have been deployed for traffic management and direction have been issued to all not to allow heavy vehicle in the vicinity of the area which would create traffic problems. He also appeal the citizens not to carry any lethal weapons, remote key, camera and maintain security guidelines and checkups to face any inconvenience at IG Park. Kasi added.