On the culmination of the ongoing ‘Swachhata Hi Seva’ campaign launched by the central come to an end today, the day was also observed as Gandhi jayanti and know for its day of International day of non violence.

Clean drive and Social Services  under the mission “Swachhata Hi Seva” were conducted at various places in state to mark 2nd October for it is famous for.

Few media fraternity with support of small children of the IG Park Power House Colony conducted social service of its approach road including the road which connected NH-415 to Power House early this morning started at around 5.30 AM.

The drive initiated by former IMC Chief Councillor Higio Arun later Councillor Tagru Tadik Social workers Tayer Kaso and senior citizens, youths, women self help group members of the colony also joined the drive. The team also cleaned the area of IG Park Middle School. In Ward 11 huge garbage were collected but is was surprised to know that no IMC vehicle lifted the garbage till afternoon.

She also attended the social service at F Sector and E Sector Itanagar attended by Director Accounts & Treasuries Techi Tadap and others.

Cleanness drive was conducted in Ward-18 under the guidance of Councillor Gora Lotak wherein the local residents actively took part in jungle cutting, booming of the sector road, cleaning of the drainage on the sector road etc in A Sector, B Sector and Raj bhawan area.

Councillor Gora Tallang also took part in cleanness drive in Chandranager area in his Ward with youths and school students. They cleaned the jungle both side of NH-415 and collected garbage at a place while boomed the road side.

Councillor Tatung Tania attended social service in his Ward in Gohpur Tinali and sub way in his locality alongwith youths and local residents.

Ward Members alongwith local residents took part in social service in C-II sector who cleared dust and garbage from the roadside and drain and also motivated the youths in maintaining cleanness in surrounding for good health and environment. and other senior leaders and local residents attended the drive. 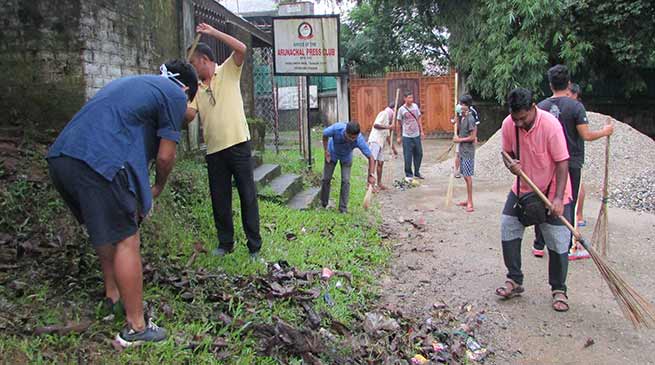 DOIMUKH: 12th Battalion NDRF based at Emchi under Doimukh Circle today conduced sramdan under swachhta he seva campaign at Emchi from Fishery Training Centre road to IOC depot, a total of 180 personnel’s of NDRF including 34 villagers of the nearby village and few PRI members participated.

BALIJAN: The Gandhi Jayanti and the cleanness driver today held in the administrative circle which was attended by the local resident and PRI members supported by the ADC Office. Pantatin programme was also held IN PHC and ADC office campus attended by EAC Balijan J Padu and other officers.