A case against the unknown person was registered Itanagar Police Station Case No-23/19 u/s 123 (B) IPC of the Prevention of Insult to National Honour (Amendment) Act on Saturday, according to Police sources.

The case was filed in connection with an incident on the function of republic day held on Saturday, wherein Governor, BD Mishra had to faced embarrassment before thousands of visitors when the national tricolour fell off the post to the ground as he pulled the string to unfurl it.

Sensing the gravity of the situation, two personnel jumped in for rescue and held the flag in their hands while Governor performing the ceremonial salute.

Taking serious note of the incident, the Governor ordered a probe on the spot and following his order, a case under the relevant sections of the Prevention of Insult to National Honour (Amendment) Act was lodged here at Police station, Itanagar.

According to an official order issued by Chief Secretary office on Saturday, Commissioner, Power, GS Meena has been directed to inquire into the embarrassing episode and submit the report within a week.

In the meantime, Joint Secretary, Home, C N Longpai has also directed the Director General of Police (DGP) to sacked all those responsible for the mishap, if found guilty. 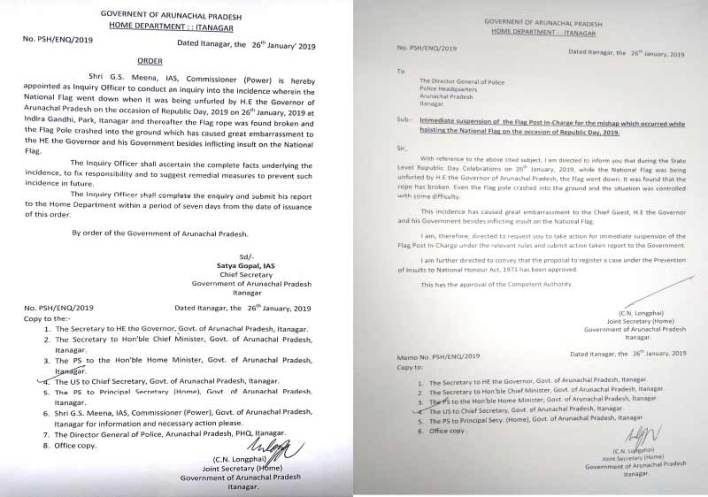 Meanwhile, incriminating materials such as Flag, rope, and the pole has been seized for further examination by police and probe is on, ” informs,  officer -in charge, PS, Itanagar, Tabi Bage.

He said three respondents were under their scan that is District administration, issued the flag, PWD department that provided pole and its stand and, PTC, Banderdawa that arrange the entire flag hoisting ceremony.

He also hinted that their preliminary inquiry suggests that the rope used to tie the flag was too old to use and already worn out.

” Efforts are on to establish out of three , which team is responsible for the whole mess,” he added.

Criticising the district administration for poor management which led to the embarrassment, Apang said that ” Disrespecting our national flag means disrespecting the nation” and urged state government that such thing mustn’t repeat in near future and punish the wrong doers immediately.

Summing up, All Nyishi Student Union,(ANSU), President, Toko Takam and Arunachal Civil society (ACS), president, Patey Tayum called for slapping of highest punishment under the law against the accused.

A short clip of the incident which has gone viral in the social networking also drawn lots of criticism from all section of society.

SP Crime, SIT and Incharge PTC Navadip Singh Brar said that it was an unfortunate incident which took place at IG Park while flag hosting during republic day parade. On the direction of Director General of Police (DGP) SBK Singh an enquiry  have also been initiated by police headquarter headed by  Inspector general of Police (IGP) Law & Order Dr. Sagar Preet Hooda to find out truth and fix responsibility.

The flag keeper of PTC Head constable Taje Maying has been suspended. One FIR also been registered with Capital Police on the direction of the DGP. Brar added.