The Chief Minister who launched the e-ticket system (http://apstsonline.com/), which is first of its kind in the state at the Chief Minister’s conference, said with the digitalised system, it will be easier for passengers to able to travel at ease making use of this system.

Through this facility, passengers can book their tickets online using internet banking services and using credit card or debit card, much ahead of their journey date. They can book the ticket using any internet services from any part of the globe, with information on seat number, departure time and fare. On booking the tickets online, the user will receive message of confirmation through SMS and email.

The first online booking was made by the Chief Minister himself with receipt of an SMS and email confirmation message over his phone device. A print out of the confirmation ticket was taken out and displayed completing the launch of the e-ticketing system.

Besides proving advantage for passengers, the e-ticketing system will also check revenue pilferage. The department officials informed that the department will be launching a mobile app for e-ticketing within 45 days. As step towards digitization, the Itanagar bus station will be digitized in first phase, while rest in the state will be covered on phase wise soon. 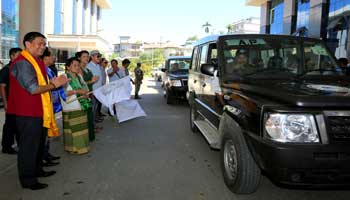 Flags off new fleet of APSTS buses and Tata Sumos

Chief Secretary Gamlin instructed the transport department to immediately vacate the huge number of unused vehicles that were parked in its transport depots. She asked them to take up auction for old vehicles so that new procurement can be made to increase the state transport fleet.

Further to improve public services, the Chief Minister suggested the department to hire expert consultants to run bus terminals across the state on PPP mode.

Transport department General Manager Abu Tayeng informed that state buses will be equipped with CCTV cameras. Besides providing security measures, the CCTV cameras will also check any malpractices by the bus conductors. A separate static seat for bus conductor with clear view from CCTV camera will be in place on every bus, he informed.