CHAIBASA ( Jharkhand )-  Irritated villagers, mostly women, blackened the face of a school teacher with ink and made a garland of shoes on him in the West Singhbhum district of Jharkhand for allegedly showing girls pornographic videos in class and touching them inappropriately.

After the police, having learned about the incident, rescued the accused and took him to the police station, the villagers sit on dharna, demanding that the teacher should be send to jail immediately.

At least six students from the improved junior high school in Noamundi Block told their parents that the teacher showed them indecent videos and touched them inappropriately, the policeman said.

On Wednesday, the villagers filed a written complaint against the accused.

Stating that, despite the lodging of a complaint, no action had been taken against him, the villagers organized a meeting and decided to punish him.

Women in large numbers caught the accused, smeared the ink on his face on Thursday and decorated him with shoes.

When, after the parade in the Badajamda area, he was taken to a nearby railway station, the police reached at the scene and rescued accused teacher.

The protesters then sit on dharna in front of the police station, demanding that the accused should be sent to prison, the policeman said.

District Inspector (Kiriburu) Virendra Ekka tried to calm the agitated women who had led the demonstration for several hours.

The chief of the Badajamda police station, Basudev Toppo, said the case was under investigation. 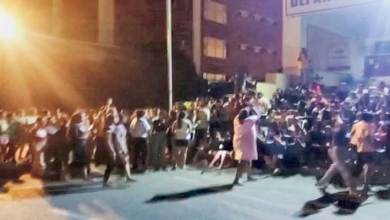