Arunachal Pradesh State Government has declared state mourning for two days i.e on 5th and 6th September 2017 as a mark of respect to the departed soul of Late Jomde Kena, Health and family Welfare Minister who expired at Guwahati hospital after prolonged illness on 4th September.

During the period of state mourning, the national flag will be flown at half mast through out the state while no official entertainment will be conducted. 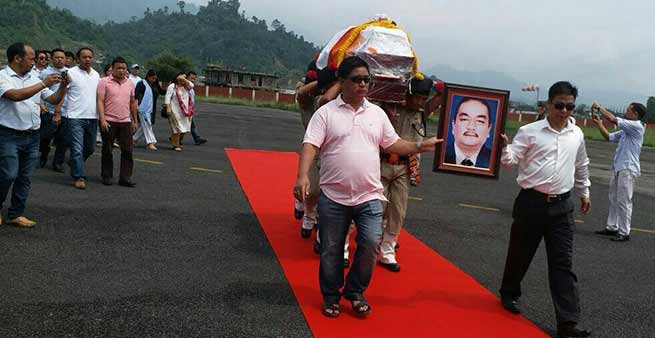 The state government has further decided to accord state funeral to the departed soul and all offices, government undertakings, educational institutions under Government of Arunachal Pradesh shall remain closed on 6th September 2017 on the day of funeral.

A condolence meeting was conducted at the premises of Civil Secretariat in front of Block B to condole the sudden demise of Late Jomde Kena where the secretariat officers and officials were present.

Commissioner Hage Khoda Shalla read out the condolence message on behalf of the Chief Secretary and others which said “Late Jomde Kena will be remembered as one of the extra ordinary politician with rare political acumen and adminitrative skills which made  him a distinct leader in the history of Arunachal Pradesh”.

Two minutes silence was observed to pay homage to the departed soul.