While interacting with the people, the Union Minister highlighted that the Union Government led by Prime Minister of India, Narendra Modi, accords top priority to Northeast to drive an ecologically responsible economic growth of the New India. The Minister had the opportunity to interact with beneficiaries from Prime Minister Ujjwala Yojana (PMUY) and Pradhan Mantri Awas Yojana (PMAY).

Speaking about the role of Northeast in the New India’s economic progression, the Union Minister, Sarbananda Sonowal, said, “Under the dynamic leadership of Prime Minister Narendar Modi, the people of India are finally availing benefits that has helped their ease of living through welfare schemes of the government. It gives me immense pleasure to personally interact with many of you today and hear how these schemes like Prime Minister Awas Yojana, Prime Minister Ujjwala Yojana has made such useful impact on your daily lives. Let me assure you that the mantra of Modi Government; i.e. Seva Sushashan and Garib Kalyan will continue to drive our vision of developing a strong, prosperous & proud new India.”

The Union Minister also visited Sikhe lake to attend the Yoga Utsav as part of 12 days countdown to International Day of Yoga today morning. He was accompanied by the Minister of Education, Cultural Affairs, Indigenous Affairs, Government of Arunachal Pradesh, Taba Tedir and the Minister of Agriculture, Horticulture, Animaly Husbandary and Veterniary, Government of Arunachal Pradesh, Tage Teki along with other Yoga enthusiasts at the Yoga Utsav this morning. 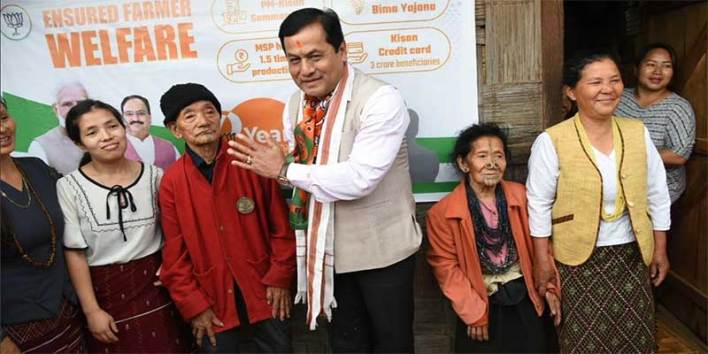 The Union Minister visited Hija and Lempia village to interact with the local people, organisations as well as beneficiaries of the welfare schemes, and was served sumptuous Abotani lunch at the residence of Taru Tatung in Hija village.

Also Read- The role of Arunachal Pradesh is key to the role of Northeast as the engine of growth in the New India: Sarbananda Sonowal

Interacting with the people, the Union Minister highlighted the importance that the Modi government accords to the Northeast and how it has been envisaged that the region will drive the growth engine of new India. Sarbananda Sonowal said, “Since Modiji took charge as Prime Minister, the Northeast has received its due attention like never before. Due to this renewed vigour to elevate Northeast economically, the region has experience tremendous growth & development in these 8 years.

As the world moves ahead cautiously to strike a balance between ecology and economic growth, the key role of Northeast is to drive an ecologically responsible economic growth for the country. We must prepare ourselves, equip our skillsets and develop platforms to seize this wonderful opportunity to unlock the immense potential that our beautiful region possesses. Our government under Modiji remains committed to this idea and its efficient implementation.”

Earlier the Minister spoke how people of Arunachal Pradesh has benefitted from the various social welfare schemes launched and implemented during the 8 years of Modi Government. In this regard, Sarbananda Sonowal said, “In Arunachal Pradesh, more than 2.20 lakh rural households have received tap water connections under Jal Jeevan Mission.

With more than 34,500 houses in Arunachal Pradesh, the PM Awas Yojana has helped people of the state to earn a shelter they can call their home. More than 48,000 LPG connections were given under Ujjwala scheme to the needy people of Arunachal Pradesh. The government continues to work to make lives of our citizen comfortable and dignified with its welfare programmes.”