In this episode, Arunachal24 Citizen Reporter travelled and covered the painful story of those who travel or passing through Joram-Koloriang road……read this report and watch video.

The commuters of Kra-Daadi district and Kurung Kumey district have expressed their struggles and hardships due to the road condition of and claimed that the economy of both districts have gone down in recent years owing to bad road condition.

The said roads are “Joram-Koloriang highway which was recently flagged off from Talo point to Kra Daadi point and another one from Kra daadi to Koloriang township”.

Palin area development committee (PADC) Chairman Tassar Duli, claimed that till now hundreds of  vehicles have been damaged due to the bad road condition and commuters get stranded regularly in the muddy road.

He also alleged that the construction is being carried out without following proper guidelines. “Machines are being engaged for earth cutting without anyone to supervise those who are doing the work. Even the sub-contractors are often not seen when the cuttings are being done. Due to that also there have been a lot of mudslides,” he added.

He further said, “At least it will be a great help, if machines for clearing roads are kept at every 20 kms. So that when someone is stranded they can clear it without much delay.”

Kipa Senung, a youth leader from Nyapin said that the economic and all other development is totally dependent on connectivity and communication, we want good road but the road is under construction and even if timely it may take around three years but at the sane time the construction agency should ensure the uninterrupted traffic flow on the said road as it is strategically importune for public and defense purpose.

A youth leader Bengia Rekam said that the state government is kind enough for starting of the work but it should be done on war footing.

He said that the district administration of Kurung Kumey and Kra Daadi should direct the NHIDCL and construction agency to supervise the progress of the work and also direct them that the road does not got blockage oftenly and commuters does not have to waste hours together in several places on the same stretch right from Koloriang in Kurung Kumey district to Talo in Lower Subansiri district. he added.

Meanwhile, Home Minister Bamang Felix said that construction of the road is kept on hold due to continuous downpour and informed that the work will be resume in full strength once the monsoon season passed by. He further added that the construction is targeted to be completed by 2022.

He further added that he had taken review meeting of the road construction with the General Manager of NHIDCL.

He further added that necessary maintenance is being carried out.

Arunachal: Governor dedicates ‘General Bipin Rawat Hall’ to the people of the State

Arunachal: Governor dedicates ‘General Bipin Rawat Hall’ to the people of the State 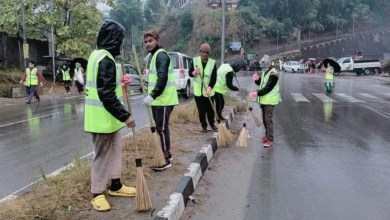