ITANAGAR-  The All Arunachal Pradesh Student’s Union  (AAPSU ) will hold a  Protest Rally at Itanagar and sit-in dharna outside the office of Deputy Commissioner in all districts of the state on 5th October 2021 to register AAPSU’s strong protest against the ” State Government’s lackadaisical attitude towards the Offspring issue”.

An emergency meeting of the All Arunachal Pradesh Student’s Union (AAPSU) was held under the chairmanship of its President  Hawa Bagang at Itanagar on 29th September 2021 to discuss regarding the vexed issue of off-springs borne to APST mother and Non-APST father.

The house unanimously condemned the cancellation of the meeting of Joint Consultative Committee (JCC) on the issue which was supposed to be held on 29th September 2021.

The All Arunachal Pradesh Student’s Union  (AAPSU )takes  serious exception to the lackadaisical attitude, inordinate delays and dillydallying tactics adopted by the Department of SJETA, Government of Arunachal Pradesh in coming out with a draft form of the proposed legislation on the “Offspring” issue as demanded by the Union since 2018.

Arunachal: State Govt is committed to work for the welfare of the student community – Chowna Mein 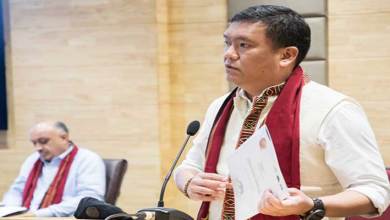