Meet the person who treks 8 hours to deliver measles-rubella vaccines to children in  Mago village of Tawang in Arunachal Pradesh.

Mago, a small, remote village in Arunachal Pradesh, has no primary healthcare facilities. But Mr Phurpa, a trained medical assistant, is working since 2013 to ensure that children in his village don’t suffer. He treks long hours every day to immunise kids against measles and rubella.

Bordering China and being the last border post in the district of Tawang, Mago remains one of the most isolated areas in the state. It has neither primary healthcare facilities nor a market for daily necessities. One must tread trek at least 36 km to the nearby town of Jang to access even the most basic facilities.

Phurpa, a 32-year-old trained medical assistant, wants to change this. Since 2013, Phurpa has been trekking various mountains and crossing streams every month to provide the children of Mago with vaccinations for Measles-Rubella.

Since undergoing his training in 2011, Phurpa wanted to do something good for his village. So far, he has vaccinated 35 children in the village, which houses 75 families. Recently, he has also started delivering polio vaccines in the area.

“I took it up as a challenge to bring healthcare closer to the children of a village that doesn’t even have roads. Now, I am so glad that these children are out of danger from measles and rubella,” Phurpa says.

The campaign under which Phurpa is working since 2013 is a part of a global effort to reduce illness and deaths because of measles, rubella, and congenital rubella syndrome (CRS). This, in turn, has helped reduce child mortality under the age of five years and prevented CRS.

Despite the tough terrain, Phurpa’s campaign has achieved a success rate of 100 percent. Besides this, he also carried out a vaccination drive in Luktham a few months ago – another treacherous journey of 12 hours. For his work, Phurpa is paid a monthly salary of Rs 25,000.

“After a series of training sessions from Tawang District Hospital, Phurpa requested higher authorities to allow him to travel to his village Mago. He wanted to bring basic healthcare closer to the people,” he says. 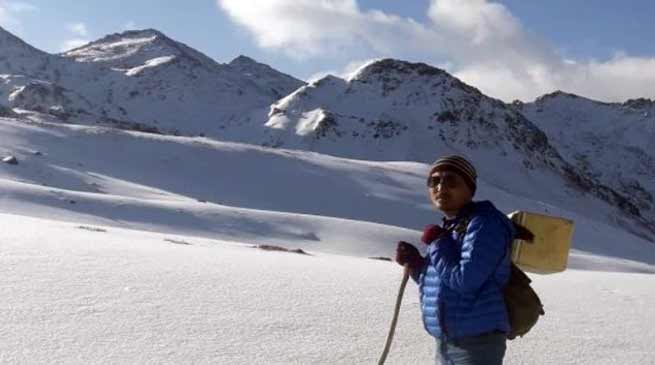 Vaccination drives in remote areas are usually assisted by helicopters. But Phurpa did not hesitate to travel by foot and reach out to as many children as possible. Not surprisingly, he has received quite a few tokens of recognition for his efforts.

“Apart from the residents, the officers of the armed forces stationed at Mago found it remarkable that children were being vaccinated in such remote areas,” Dr Wangdi says.

Earlier this year, on Republic Day, the District Commissioner of Tawang awarded Phurpa for his commendable work. He was also honoured by the Government of Arunachal Pradesh.