ITANAGAR–   The under construction steel Arch bridge on Kumey river on Yangte-Tali road in Kra Daadi district has been collapse again before it’s completion.

“It is like a punishment for the people of Tali area before getting  the direct communication by surface road as the people of the constituency has been without surface communication and direction communication with rest of world since India Independence”. The local expressed their painful feelings to this reporter over phone.

The sources inform that  this time that the damage has been caused to the steel Arch tower in left bank and the incident  tookplace at around 5 PM on Sunday March 28.

Meanwhile Kra Daadi Deputy commissioner Higio Tala has confirmed the incident. Tala informed that the Tali ADC Kipa Raja has been directed to inspect and submit a report.  After submition of the report further action may be initiated. DC said. 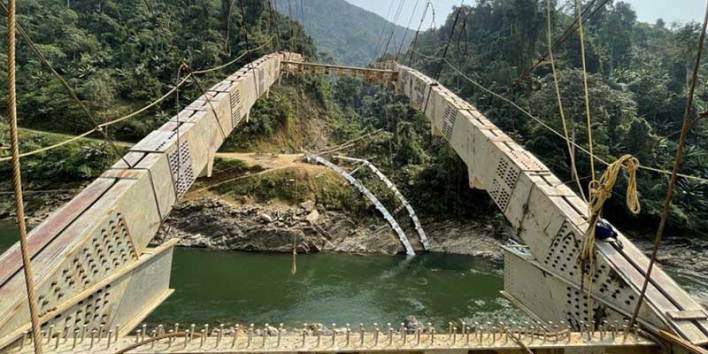 Tali local MLA Jikke Tako informed that “I have apprise the incident to Chief Minister over phone. A team of engineer from PWD led by Chief Engineer has visited the site. Jikke said.

The PWD should initiate enquiry at their level to unearth the main cause of bridge collapse and also for its reconstruction. Jikke added.

Earllier the 280 feet single lane baily bridge was collapse in the month of Sept 2019 during the trial run before inauguration.

The bridge was under construction by PWD Tali division at an estimated cost of Rs 14 crore and after it collapse the state government has provided fund for rehabilitation and reconstruction and again it got collapsed on Sunday March 28.

Serious concern are being raised in social media on the way the bridge got collapse twice.