Havildar Hangpan Dada of Arunachal Pradesh who killed four terrorists before laying down his life in Kupwara on May 26 last year, has been awarded Ashok Chakra, the highest peace time gallantry award. His wife Changsen received the award from the President Pranab Mukherjee during the 68th Republic Day Parade in New Delhi .

The Ashoka Chakra is India’s highest peacetime military decoration which is being awarded for valor, courageous action or self-sacrifice away from the battlefield. Havildar Hangpan Dada of Assam Regiment killed four terrorists at the height of 13,000 feet in the harsh and icy Himalayan range of Kashmir. 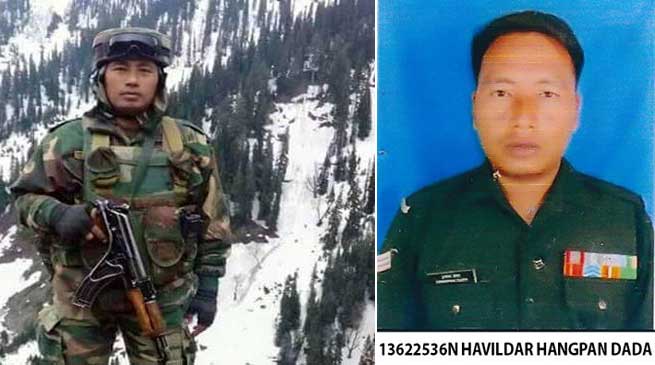 Born in Village Borduria, Tirap district of Arunanchal Pradesh on October 2, 1979, Hangpan, fondly called Dada by his comrades, got recruited in the 3rd Battalion of the Parachute Regiment on October 28, 1997. He was transferred to ASSAM Regimental Centre and on January 24, 2008 he was taken on strength of 4th Battalion The Assam Regiment where he served the most.

On 26 May 2016 Hav Hangpan Dada, as Sabu Post Commander of 35 Rashtriya Rifles, while establishing a stop along with his Section at 12,500 feet led a charge on hiding terrorists in Naugam, J&K resulting in neutralisation of four heavily armed terrorists.

His gallant action of eliminating three terrorists in close quarter engagement and injuring fourth one in utter disregard to personal safety not only foiled the infiltration bid but also ensured the safety of his section. While engaged in fierce gun battle with the third terrorist, Dada sustained a sudden burst of automatic fire from the hiding fourth terrorist. Undeterred by the gun shot wound, Dada continued to pin down the fourth terrorist and later succumbed to his injuries before wounding the terrorist badly.

Dada lived whole life on his terms. Whether it was getting recruited in Special Forces or volunteering out for a tenure in Rashtriya Rifles, he lived with his head held high. In death as in life he stood for the righteous path, leading his comrades on his terms.

This supreme sacrifice by Dada, is yet another example of the unflinching love and dedication that people of North East possess for their motherland.