After receiving  a telephonic requisition form Deepu Deka, ADC, Tinsukia, Assam about the leakage of  chlorine gas at Krishna Dham area near Shiv Dham, Tinsukia at around 11 am on Wednesday, a NDRF team reached the site for rescue Operation. 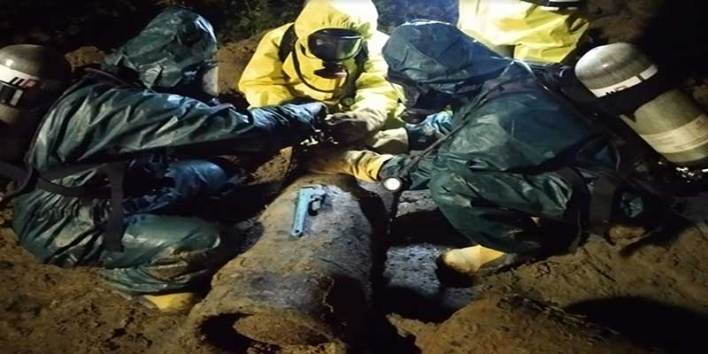 The team found that ” Leakage of chlorine gas occurred from some cylinders which was illegally dumped in the ground each weighing around 40 kgs and was covered by concrete slab. Local police, SDRF, Fire services and IOCL representatives were present at the incident site.

The NDRF team under command of Insp Milan Biswas along with CBRN equipments and under super vision of Sanjay Prasad Sharma, Asstt. Comdt. analyzed the situation and launched rescue OPS in the early afternoon.

The concrete slab is removed with the help of JCB provided by district administration  and total 18 cylinders has been recovered out of which 01 nos cylinder was found having leakage, as soon as team shielded the leakage and the cylinder was disposed off by burial with lime.