In an order issued here today, District Magistrate Keerthi Jalli said curfew has been clamped from 6 am today to 7 pm of May 12 in entire Hailakandi district.

Following emergency-like situation, curfew has been imposed by the district administration in entire Hailakandi district of Assam to maintain peace and tranquility on Friday.

The clashes broke out between two religious communities outside a mosque today. Sources said rioters threw stones and set vehicles ablaze, forcing the police to launch a baton-charge and fire warning shots in the air.

A few days ago, unidentified people damaged the vehicles of people visiting the mosque. The mosque management had filed a police complaint at the time. This afternoon, a group of youngsters allegedly began throwing stones at devotees who had assembled outside the mosque in Marwari Patty area to offer prayers. As many as 15 people, including three constables, were injured in the violence that followed. Several shops in the area were also vandalised.

In an order issued here today, District Magistrate Keerthi Jalli said curfew has been clamped from 6 am today to 7 pm of May 12 in entire Hailakandi district as ‘there exists strange relation between groups who are trying to indulge in violence and create communal violence’ necessitating the administration to take immediate action ‘in view of the present events’ to ensure speedy remedy for maintenance of public order and tranquility. 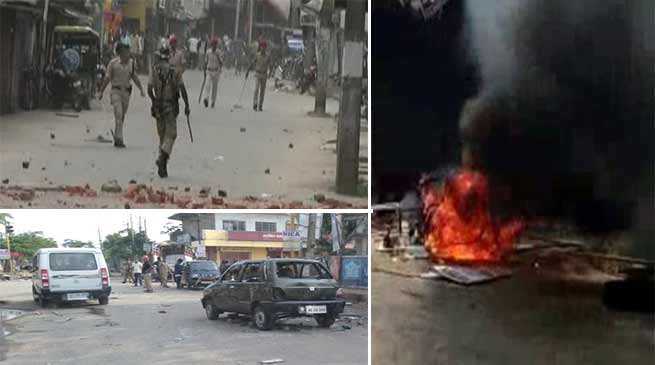 CRPF and Assam Rifles have been deployed in trouble torn and sensitive areas. The administration has sought the help of the Army to bring the situation under control.

Jalli has appealed everyone to exercise restrain and to maintain peace and tranquility. Stringent action will be taken against anyone moving around, as per provisions of law, she warned.

The curfew will remain in force until further orders. Additional security forces have been rushed to Hailakandi from Silchar and Karimganj, sources added.