Talking to reporters at Namsai, Bora said, “This is the first visit of the regional committee. We will be going to Lohit district from here. We are confident of resolving all differences amicably through discussion.”

As many as 12 panels were formed by the two governments, following discussions between Assam Chief Minister Himanta Biswa Sarma and his Arunachal Pradesh counterpart Pema Khandu on July 15, which had also led to the signing of the ‘Namsai Declaration’.

The two states, as per the declaration, decided to restrict the number of ‘disputed villages’ to 86, instead of the previous 123, and agreed to make attempts to resolve all issues by September 15.

“We have come to know that there have been some problems in a few areas after the Namsai Declaration was inked. We should refrain from creating a war-like situation over minor issues,” Bora stated.

Bora urged the people in the border areas to maintain peace as the talks were progressing well, especially after the signing of the Namsai Declaration.

On the disputed areas in Namsai, Bora said people have cooperated during the visit.

“There are some differences over an area in Tengapani village where eight families reside. Both states claim these families to be their residents. We can resolve this through discussion,” he said. 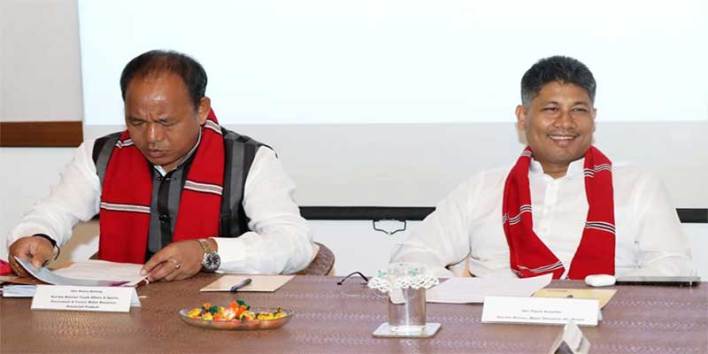 At Balipara in Sonitpur district, Mama Natung, environment and forest minister of Arunachal Pradesh, along with his team, discussed matters related to interstate border dispute with the delegation led by Piyush Hazarika, according to an official release.

It was decided at the meeting that the regional committees would visit the disputed areas on September 2 and 3, and hold talks with the local residents for finding an amicable solution, the release added.

Speaking to reporters later, Hazarika said, “There are four villages which both the states claim to be theirs. We feel that through discussion, this matter can be solved

The minister added that a “give and take attitude” was necessary for solving these differences, adding that he was confident of a positive outcome.

Assam and Arunachal Pradesh share an 804.1-km-long border. Arunachal Pradesh, which was made a union territory in 1972, had complained that several forested tracts in the plains that traditionally belonged to hill tribal chiefs and communities were unilaterally transferred to Assam.

After Arunachal Pradesh achieved statehood in 1987, a tripartite committee was appointed which recommended that certain territories be transferred from Assam to Arunachal. Assam contested this claim and the matter is in the Supreme Court.