PASIGHAT  ( B- Maksam Tayeng )-  The people of Nugong Banggo areas which is comprises of 8 major villages on the left bank of Siang river under Siang District has alleged huge discrepancies in the construction of Komsing -Sissen PMGSY road amounting total funding of Rs. 35.54 Crores \by the contractor who have grossly violated from the original DPR.

In a press statement, Nugong Banggo Kebang, Secretary General, Tanyong Taloh has said that the union government led by PM Modi had sanctioned huge funds of  ore than Rs. 35 Crore for the construction of road under PMGSY scheme vide package no. AR/04/02/033 after people of Nugong Banggo had repeatedly appealed to the state and central government. He also said that the villagers of Sissen had even gone on to protest the 2014 parliamentary and assembly election with the theme ‘No road, no vote’.

“Being the most neglected banggo/area of the entire Adi belt, the people of Nugong Banggo have always aspired for a good road as some of the villages then were only contacted with foot tracks leaving the people in much hardship. But to our utter surprise, the funds sanctioned for our good road were all drawn by the contractor without properly constructing the road”, added Taloh.

While talking to this scribe, Taloh said that the said road is being constructed deviating from the DPR and construction is done for the namesake only and funds for the formation cutting, culverts, bridges, retaining wall and drainage were drawn by the contractors without any visible progress in the site.

“NBK had time and again apprised the matter to the concerned executing agency and the contractors, but our appeal and resentment were not heard”, quoted Taloh .

The formation cutting of the road from Komsing to Sissen constructed by M/S Ragiaku Enterprises was constructed at the whims of the contractor without following the DPR/standard specification of the PMGSY manuals for which the road stretching from Komsing village to Abung Korong/river, Pangi village to Lebung Korong/river and Senbung to Sissen village gradients is very steep.

There are no chances of flying of vehicles in these portions of road without rectification or realignment as the roads were constructed in a haphazard way to avoid hard and rocky areas without proper alignment which is totally in deviation of original DPR of the project.

As per DPR the road length is 40.35 KM, but the contractors have constructed the road with only 33.3 KM length which is short of 7.5 KM, informed the Nugong Banggo Kebang. 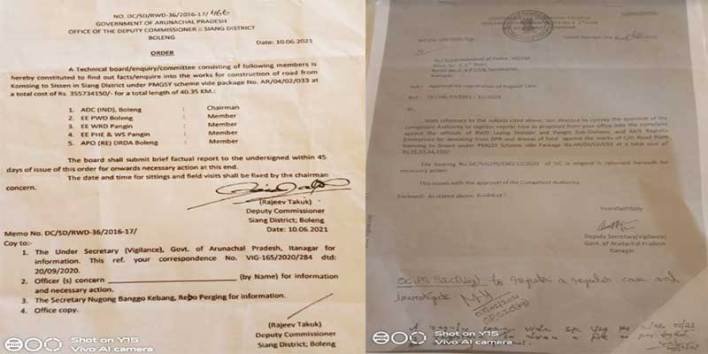 As per the complaint lodged by the NBK, a case was registered with SIC (Vig) vide No. SIC/VIG/PS/ENQ-12/2020 after which SIC had directed Dy. Commissioner, Siang District to form an enquiry committee based on which the then DC Siang, Rajeev Takuk had constituted a committee under the Chairmanship of ADC Boleng.

But the committee is yet to visit and inspect the road. NBK Secretary General, Tanyong Taloh informed that he had called on to ADC Boleng recently for early visit of the committee to the road, but due to unfair weather the concerned ADC has taken time.

However, the people of Nugong Banggo have appealed to the state and central government to direct the concerned executing agency and contractors to rectify the road construction at the earliest possible time.