NONGTHAM- The mortal remain of the Journalist Jason Khangthing laid to rest with full ritual at his native Village Nongtham under Kharsang circle of Changlang district. Huge crowds of villagers, well-wishers, family members, and media fraternity attended the rites to pay their last homage.

Jason Khangthing lost his life in the line of duty on April 5th last. He was on his way for reporting for Miao- Vijaynagar road when his bike collided with the trolley of a tractor.

Further, he also expressed his gratitude to the villagers and well-wishers for attending the funeral in huge numbers to show their love and support to a journalist as well as their son of the soil. “I am really amazed witnessing such huge love and support, please continue doing such supports to the family members ‘expressed Sangno. 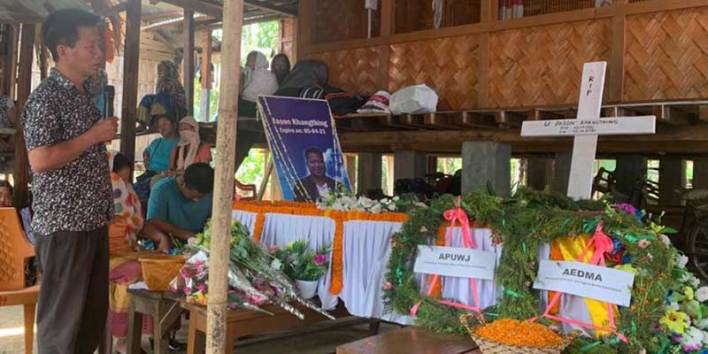 While responding to the appeal of Nongtham youths and Gaon Burah , Sangno assured that every possible helps will be extended to the family members of the Jason from media fraternity of the state.

CEO, Arunachal Today further informed the gathering that as a mark of respect to the departed soul and his passion for the journalism team Arunachal Today will initiate an annual award in his name, as well as retire the ‘ID No. AT/06’ assigned to Jason so that it would not be allotted again to anyone.

Kekar-Monying, a giant cliff of Arunachal Pradesh gets a new plant species

Heavy showers on the cards across Arunachal Pradesh on Saturday