Now with the inauguration, both the sub centre hospitals  it started functioning with Health staffs posted in these facilities joining their duty from today. Likewise, on 18/08/2021, Sub Center Ranglua under Lawnu administrative circle was also functionalized it was inaugurated by Kanubari Gabriel Denwang Wangsu.

On this occasion,  an interactive meeting with the villagers was also held at Niausa village.  Speaking at the meeting Tanpho Wangnaw appreciated the works of District Medical Officer towards making the health facilities accessible to the people. 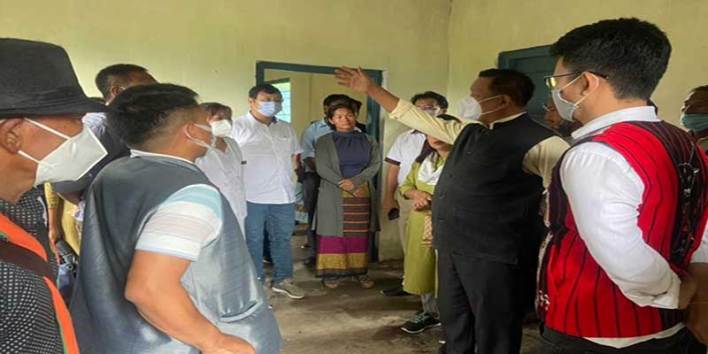 He said “now the villagers won’t have to travel long distance to visit District hospital for basic healthcare needs, those will be taken care in the sub centre”. He assures all help from his end, so that the sub centre performs in a proper manner. He also said that he will work for the overall development of the area without any political difference and urged people to think and act in a democratic manner without political consideration.

Dakli Gara, ADC incharge also spoke in the meeting; he requested the public to provide full support to the officials posted in the district. He also urges them to take proper care of the assets that the government provide and make sustainable use of those assets.

DMO Worar Taku, advised people to visit the sub centre instead of calling the medical staffs home, he said that all necessary arrangements will be done from his side so that the people get all probable health facilities.  He also informed that so far six non-functional health facilities in the district have been made functional in the short period of 8 and 1/2 months in the district.

The local leaders from the village also spoke at the meeting they appreciated the effort of the government to functionalize the Sub centre and making healthcare facility accessible for the villagers.