Fifteen members of Ignited Minds group- a group consists of one hundred thirty-six students and a teacher visited Seram Village under Mebo Sub-Division here in East Siang District of Arunachal Pradesh on Monday last to share some items of basic needs as token of love.

Seram Village is one of the most beautiful villages of East Siang District of Arunachal Pradesh. It is located on the riverbank of the mighty Siang River and the village is bestowed with fertile land in abundance. Location of Seram Village on the bank of Siang River gives a beautiful touch with fresh and cool breeze, one can enjoy the beautiful view of Daying Ering Memorial Wild Life Sanctuary on the other side of the Siang river bank decorated with beautiful flowers of grass called Pikolio among Seram villagers in local name and birds under clouds to mention few natural beauty but the irony is that the mighty Siang and other streams that flow beside the village trouble the villagers in more than one way, shared Dr. T. Payum, a teacher in JNC who heads the Ignited Minds.

Many a time, villagers have to relocate their houses and have also lost the land in acres. Literarily, the concern of flood could be seen on the face. During interaction with Village Gam Bhura, Villagers and Village Secretary, the team learned that the courageous and hard-working villagers made it possible to supply most of the fresh, healthy organic vegetables, Musa spadix called Paksum in Adi, chilly, rice, dry fish, etc. in the Pasighat market. 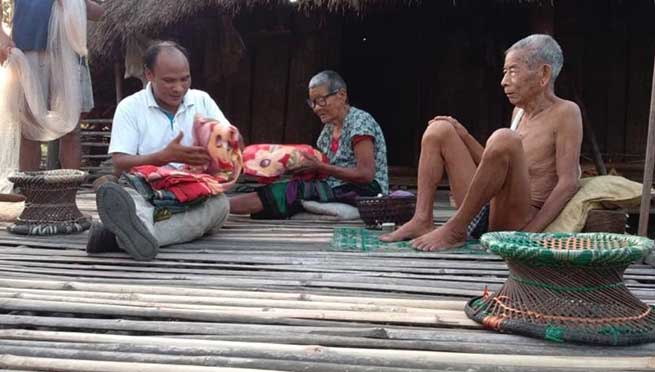 The team members expressed their gratitude and thankfulness to the beautiful broad minded people of the village senior citizens and children who accepted their token of love and care in the form of pen, eraser, pencil, general knowledge book, Dictionary, clothes and blanket, informed team Ignited Minds.

The team reached forty houses in the day, the forty pieces of blanket was donated by Dr. T. Payum, a teacher of Jawaharlal Nehru College, Pasighat and other items were donated by the Students of Jawaharlal Nehru College, Pasighat. The visit to Seram village on Puja holiday was a holiday spent well in learning the real life situation and understanding of the natural disaster like flood and its effect on the population, said college students of the Ignited Minds. The team attempted to discuss the two sides of a coin like beauty but ugly and resourceful but disastrous, added Dr. T. Payum.

The team is also thankful to T. Lego of Seram Village, who managed the field visit program and kind-hearted and beautiful village women for delicious food and hospitality.