SEPPA- Twenty Self Help Group members from East Kameng district under Arunachal State Rural Livelihoods Mission (ArSRLM) have been departed from Seppa HQ to various locations of Assam for exposure from 23rd to31st August 2021 with a theme, “Azadi Se Azadi Tak” and also achieve gender equality and empower all women and girls and to support the achievement of Sustainable Development Goal (SDG) 5. Gender equality is not only a fundamental human right, but a necessary foundation for a peaceful, prosperous and sustainable world.

This was the first of its kind and a historic exposure tour in itself for SHGs which was being sponsored by Mama Natung, Minister Youth Affairs and Sports, Water Resources, Environment & Forest in presence of Tapuk Taku, MLA 10-Seppa East, Hayeng Mangfi, MLA 9-Chayantajo, Pravimal Abhishek Polumatla, Deputy Commissioner and Arunachal State Rural Livelihoods Mission (ArSRLM), East Kameng District. 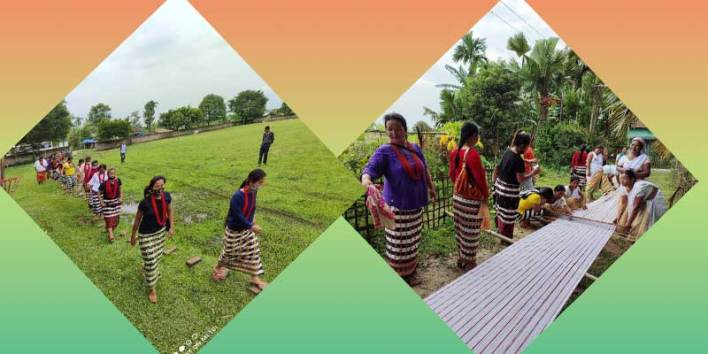 The delegates from East Kameng were provided the prospects and challenges & issues faced by them initially and their experience on bringing up such concept into reality. The delegates were eager to know and understand the functioning of market outlets and market linkages and explore the possibilities of replication in their own district as well.

There was also meeting with the local SHG artisans to understand their struggles, their collective strength and their long march towards building their own sustainable Traditional Crafting centre in Majuli.

Delegates were also visited Rupali Tant Ghar and Homestay in Majuli which is run by one SHG member Mrs. Rupali Das that made out of bamboo cottage since 2019. They have also visited Handloom- Textile Training and Production Unit and Retail Outlet of Women SHG products, Majuli.

That serve as a common outlet for the finished products of all SHGs of Majuli District and is being managed by Monikanchan VO/PLF (Village organisation/ Primary Level Federation).

Delegates were enthralled with the working and collective action of the VO/PLF and they asked many questions about their functioning. To which one of the SHG members replied that before joining Self Help Group their life was only confined to the four walls of their house and now, they can lead a life of prosperity and with respectful social status and economic security.

Secondly, they had received several skill and capacity building training which has led them to increase their knowledge and enhance confidence and also increase in income generation and livelihoods security to them.

Last day of the exposure visit was enriched and benefitted by visiting the Saulkuchi village also known as silk village near Guwahati. The delegates were surprised to see the villagers as all are engaged in Handloom activity as primary for source of livelihoods in Saulkuchi. In this handloom unit SHGs women produces Muga Silk Mekhela Chadar and Saree. The members also shared their story of struggle and achievement with the delegates.

After seeing their sustainable business models, efficient management system and approach,  the team  realised and motivated to make East Kameng also a hotspot for various economic activities where people from other districts and states can also visit and cross-learn from us one day.