NFR General Manager Anshul Gupta, while calling on the chief minister here this morning, presented the proposal. Gupta said that if the state government gives a green signal to it, the NF Railway would start the ground work immediately.

The project envisages a tourist-centric ‘Toy Train’ service in and around Tawang township that would include a park with facilities like food centers, craft bazaar, etc. As per the proposal the ‘Toy Train’ would have at least three bogies with about 12 passenger capacity in each.

Khandu welcomed the proposal and suggested the NFR officials to coordinate with the district administration for logistical support and assured coordination from the state government.

A team of NFR officials and engineers are set to visit Tawang next week for a joint survey and finalization of the project with the district administration.

Gupta assured that once everything is settled, NFR will complete the project within six months. 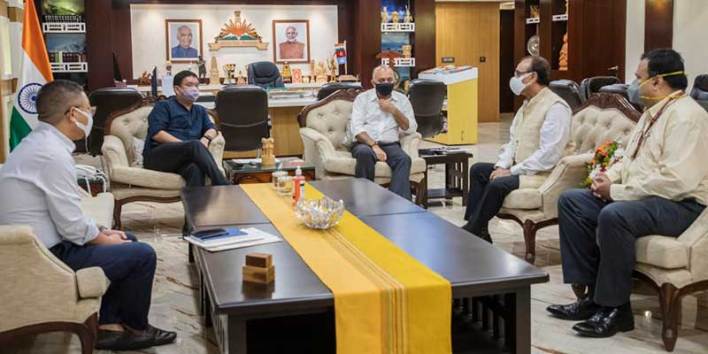 The NF Railway is already in the process of constructing a broad gauge railway line from Bhalukpong in the foothills to Tawang covering a distance of 378 km reaching a height of 10000 ft, of which about 80 per cent will pass through tunnels.

Discussing on various railways related issues, Khandu called for resumption of rail services from the state capital, which at the moment is stalled due to the COVID 19 pandemic. He pointed that while all other states have resumed rail services, Arunachal Pradesh is yet to open it.

It was decided in the meeting that except for the Donyi-Polo Express that shuttles between Naharlagun and Guwahati, the other two train services – Shatabdi (Naharlagun-Guwahati) and the AC Express (Naharlagun-Delhi) – would resume from September 1 next. The Donyi-Polo Express is awaiting finalization of fares/rates which is under review. Once done, the train too would resume its services, officials informed.

Drawing attention of the NFR officials on the importance of the Yupia bridge, Khandu sought its early construction. He said that the bridge attains significance as work on the four-lane highway between Naharlagun and Banderdewa would soon begin and without any alternate route it would trigger huge traffic congestion.

He said the Yupia bridge that would connect NH 415 (Lekhi) with the Papu-Yupia Trans-Arunachal Highway at Borum, near the railway station will considerably ease traffic congestion in Naharlagun, and also provide seamless connectivity between the ISBT and the railway station.

Gupta informed that tender for construction has already been awarded and assured its completion by March next year.

“With many travelling to southern states for studies, jobs, treatment, etc and having a large chunk of government employees hailing from these states, there’s an urgent need to have direct train services at least till Bangalore via Chennai,” he said.

Gupta informed that NFR is open to the proposal and would work on its feasibility and routes and come back to the state government.

As demand increases the Naharlagun-Delhi AC Express would be upgraded to Rajdhani Express, he informed while adding that NFR is open to new train and freight services in near future as per demand.

He also informed that NFR is under process to extend electric locomotive services in the region. At present, electric engine train services are available till New Jalpaiguri in West Bengal, from where diesel engines take over.

Gupta said overhead electricity lines will be reaching Guwahati by this month and surveys are on for laying of the same till Naharlagun railway station.

Other issues discussed were the rail connectivity to Pasighat, availing of train services by FCI and IOCL, transport of agri-horti products from the state, railways for tourism, etc as well as the role NFR can play in creating centres of excellence in sports in Arunachal Pradesh.

The meeting was also attended by state’s chief secretary Naresh Kumar and other top officials of NFR.