In his speech, the Governor said that the Vice President of India in his long political career has given his best to the Nation, done best for the people of the Nation and has been dignifiedly  chairing the Council of States, the elders’ house. Nation is beholden to him for setting a benchmark of probity in Public life, our State is beholden to him for his patronage, the Governor said.

The Governor requested the Vice President of India for help for increasing the tenure of IAS and IPS Officers of senior rank to minimum of 3 to 4 years and minimum of 5 years for junior rank IAS and IPS officers in our State Arunachal Pradesh in public interest and in the larger context of the development of the State. 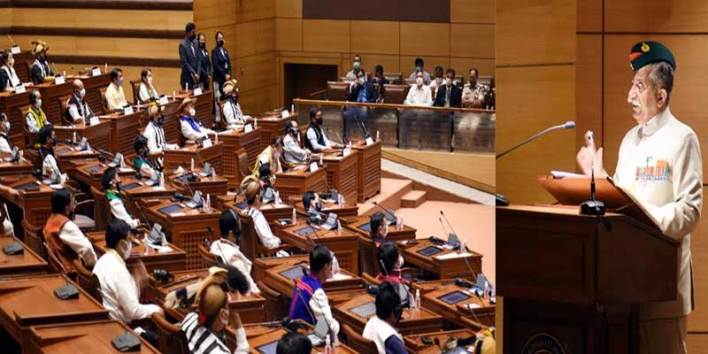 The Governor said that in the run up to the 75th Independence Day, Arunachal Pradesh is poised to prominently change the State’s developmental landscape by completing the Hollongi Greenfield Airport which we aim to inaugurate in August 2022. The strategically important Sela Tunnel project, that is going to provide all weather connectivity and boost tourism in the western part of the State, will also be operational soon. The twin turbines of 500 MW capacity of the 2,000MW Lower Subansiri Hydro-Electric Power project (LSHEP), which is being developed by the National Hydro Power Corporation (NHPC), will also be completed soon.

The Governor congratulated Chief Minister Pema Khandu ji for his Vision for a digital Arunachal. He said that Khandu is the one who has initiated the e-office and e-Pragati initiatives – aiming to improve efficiency and quality of Governance and administration and he personally monitors the developmental progresses through e-Pragati.

The Governor congratulated the Assembly house for successfully conducting its last four sessions through e-Vidhan Application.