NEW DELHI-   Many NE girls go to big cities in search of jobs, but most of them get caught in honey traps of sexual exploitation, suppression and oppression to the brim bringing an end to their lives.

Robin Hibu, special commissioner, Delhi Police and the founder of Delhi based NGO Helping Hands informed many instances of 2021 with heart rendering consequences.

( Since many NE women activists have requested NGO not to even mention the states of the female victims in cities . Respecting their volition, here are last week unabated woes faced by NE females in cities, which are very worrisome and eye opening lessons to be learnt.—- Robin Hibu, Founder Helping Hands )

CASE-1  One young female died at Fortis hospital, New Delhi on New Year day.  Monetary crunch forced her relatives to approach HH to send the body back home in coffin. The HH volunteers rendered all help to send her coffin on 01.01.22 to fulfill her last wish to be buried in her hilly village. 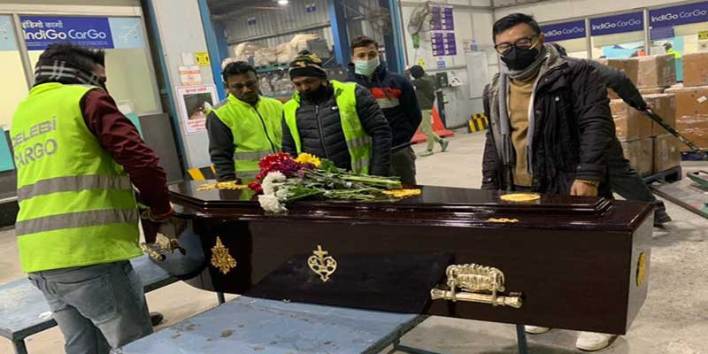 CASE-2   An Indigo Airhostess of NE was rescued from Kerala from her abusive so-called partner who used to subject her to unthinkable inhuman physical abuses and tortures. Her brother in Army approached me to rescue her. Thanks to Kerala HH volunteers with my IPS batch mate Manoj Abraham for promptly rescuing her and sent back by flight.

With tears rolling down, she lamented for committing a grave mistake by falling into dubious honey trap. “He pretended to be a diehard lover and even made fake attempt to commit suicide to win my heart. I mistook that monstrous man as a true lover”.

Battered for life, she has lost her job and back home repenting her foolish act. When I reminded if she didn’t read my awareness on fluidity of aviation – “Flight of Fantasy – woes of Airhostess “, she said that she thought: “Meri Bhala alag he, sacha pyar karta he ….. Sir mei bekuf  thi use pehchan nahi payi.”

She urged me to share her painful true story of life so that others do not fall into such trap.

CASE-3  Another young NE female was married to a rich business young man in Delhi’s Pachim Vihar after bizarre wooing tactics, like writing love letter with his blood, chasing her for two years & flooding with costly gifts.

She has been thrown out of his house with a little daughter. She told in confidence as to how she was forced to sleep with other male members of her in-laws. She was humiliated & tortured when refused and finally kicked out even without   alimony for maintenance.

The police have filed case and a HH female lawyer assisting her. But she is devastated for life. It is painful to see her little daughter holding the helpless shaky hand of her abandoned mother unaware of the cruel world without any hope and future.

CASE-4  Another NE female had pompous marriage with rich and handsome hunk. But after few years their marriage life collapsed due to difference in religion, food habits, social ethos, even dresses.

The in-laws wanted her to wear saree, but she likes wearing long pant as an educated female. This ultimately led to acrimonious divorce with two children.  She is being harassed every off and on even after the divorce.

It was pathetic to see her all alone undergoing major operation in Max Super Hospital. The HH somehow managed four units of blood from NE Blood Bank. She is all alone today, weak, hapless and trying to rebuild her life with her two children. When I counseled her why not seek help of her relatives back home. She said with choking voice that time was good with her dream man for years when she could not keep in touch with them.

CASE-5  Another young NE female had a quick marriage with a man from Dubai who was in Delhi for some work and living together happily for five years. He left for Dubai in 2020 promising to return to take her. No news, nor any contact from the man. She has been waiting without hope, but had no money to pay the rent and reached out to HH. We are engaging lawyer to help her.

CASE-6 Two young females came to Delhi from NE to meet a miracle God man from Punjab whom they had met through social media. This God man invited them to cure all their miseries with his miracle. They reached here and unfortunately he was arrested by police. These naive females were left in the lurch without any money as they had donated their all money to him.

Finding no alternative, they approached HH volunteer advocate Daniel Lyndoh and the HH sponsored their return train tickets to NE states. It’s weird that they were desperately looking for jobs for which they sought help of the miracle man as they explained me.

CASE-7  Another female entrepreneur had an agreement with businessman in city for business collaboration and paid Rs six lakh. The partner didn’t fulfill their agreement of sending equipments and started avoiding her. She is running from pillar to post for help and finally landed in my office. Her case has been taken up by HH legal team. But blind faith on an unknown business man without ascertaining his credibility is laughable and unbelievable. Alas …such strange cases are on increase day by day.

Identities including names of female victims, cities of their suffering and states to which they belong have not been mentioned honouring media ethics.

However, the Helping Hands  legal team has been counseling for marriage/court marriage and assisting NE females, who want to marry in civil courts, fight cases for alimony, custody of the child, maintenance money etc. Its members are: SC advocate Daniel Stone Lyndoh; HC advocates Rajesh Narang, Liyi Noshi & Jyothi Zongluzu. Those interested may Whatsapp to 9810083486 or email- helpinghands2016th@gmail.com.

Most of the youths begin their unknown journey from Guwahati being the gateway of NE. Thus, Assam Govt should evolve a monitoring mechanism to remain proactive in bus stands, railway station and airports to cross check and ensure that young girls are not being lured by job agents with false promises that too without informing authorities.