A college student died and another seriously injured here after head on collision between two bikes on Sunday afternoon. Irate mob burn down 4 bikes at accident site.

According to Police sources, victim Prem Towsik (22) son of Yalum Towsik from Bekhuliang village died on the spot when Bike bearing No AS –23N–5759 rider Rituraj Neog (19) from Borguri Assam heading from opposite side hit head on collision at 34 Miles. Critically injured has been referred to Dibrugrah Medical College Assam.

Investigative Officer (IO) Inspector KL Pertin said that when the mishap occurred around 12. 30 to 1. 15 PM afternoon, Rituraj was heading towards Namsai from Tezu in speed violating the road line and hit the victim coming from opposite side. A case of reckless and negligence riding has been booked under section 279/337/304/ (A) IPC. 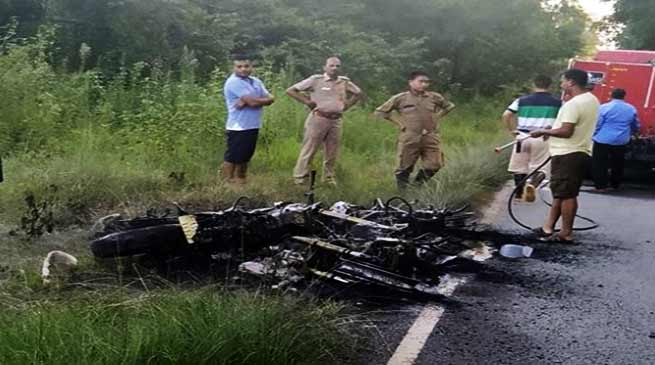 The first aids was administered to the injured patient and then doctor has referred him to Dibrugrah Medical College Assam for further treatment while after through Post Mortem the victim was handed over to the relatives for his last rite.

However, the enraged mob from victim side burnt 4 (four) Motorbikes at the mishap site.  The situation was brought under control when DW Thungon SP Lohit immediately intervened and consoled the move to avoid taking law in their hand. An FIR was also lodged by the Riders whose motor vehicles were burnt down.

The police sources further adds, 8 (eight) Bikers from Assam intruded the township without proper Inner Line Permit (ILP) and after spending few hours were returning back when the mishap occurred.  Meanwhile, police has also seized eight motor vehicles and repatriate ILP violators beyond the Dirak Gate.