Chief Minister Pema Khandu today attended the 45th celebration of Neythrii Dow festival of Hrusso community here at the festival ground at Thrizino. Addressing the gathering on this festive occasion,  Chief Minister urged the people of West Kameng and Tawang to uphold and maintain the image of these districts as peace loving and tolerant.

“In the eyes of rest of Arunachal, people of West Kameng and Tawang are known for their discipline and integrity. It is this tradition for respect of elders, being religious and peaceful, people from other district have a good image of us – giving them the sense of hope and good feelings.”

He said due to this very positive nature, the two districts have produced three Chief Ministers and several Union Ministers and urged the people to reason why people from these districts got the opportunity to serve the state in such capacity.

Khandu said it is now the opportune moment to realize the strength in us and appealed the people from the two districts to maintain the tradition of peaceful coexistence of all tribes.

Taking note of Thrizino ADC headquarters lagging in development amongst all the administrative headquarters in West Kameng district, the Chief Minister promised the people to be assured of the development to come. He promised not to let the area go backward in terms of progress. 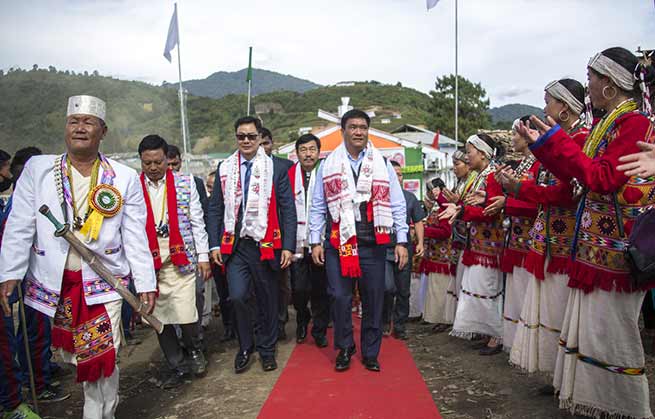 To a memorandum submitted, Khandu promised to immediately sanction funds for renovation of govt high school and construction of an indoor stadium here. He said the long pending demand for a police station in Thrizino was completed, which was inaugurated by the Chief Minister earlier on the day. He informed that 40 posts for the newly created police station has been sanctioned and soon posting of all the officials and staffs will complete.

The Chief Minister congratulated the Hrusso Elite Society for publishing a book on Hrusso script ‘Ako Na Shipyow’, which was released on the occasion. He said the book will help in preservation of local dialect and urged on promotion of mother tongue to the younger generation. Khandu earlier inaugurated the 28 km Thrizino-Palatary PMGSY road, which was completed this year in January executed by RWD. He assured support of the government for the road project if further assistance is required.