ITANAGAR-   Deputy Chief Minister Chowna Mein while speaking at valedictory function of the Walkathon and Cyclothon events which was organized to mark the Gandhi Jayanti today called upon the people to uphold the ideologies and principles of Father of Nation, Mahatma Gandhi on non-violence, truth, brotherhood and peace.

He said that Bapuji had inspired millions of Indian and people across the world through his works because of which he is remembered all around the world today.

While highlighting his contributions in the Indian freedom struggle and in promoting domestic products by people’s movements like ‘Swadeshi and Boycott’ he was a profound campaigner of ‘vocal for local’.

Swachh Bharat Abhiyan is also a realization of his dreams and visions for a clean and hygienic India which Hon’ble Prime Minister, Narendra Modi had made a mass movement by launching the abhiyan from the Red Fort on 15th August 2014, he added. 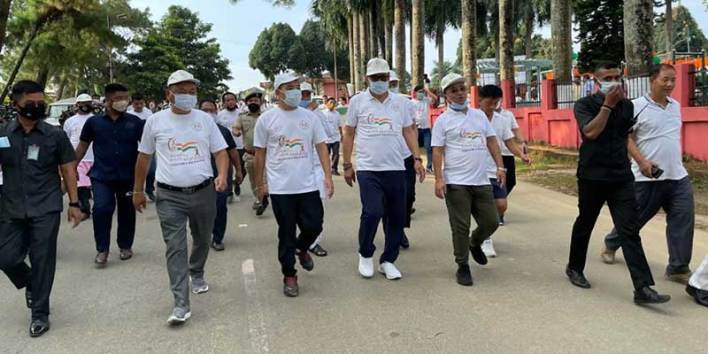 He called upon the people to not only enjoy the freedom we have received because of the toils and sacrificed made by the freedom fighters but also to realize our duties and responsibilities towards our motherland.

He said, “to maintain hygienic conditions and to keep our surrounding clean and green is one of the biggest responsibilities we have towards the mother earth, atmosphere, nature and also towards the future generation”.

He also called to join the ‘Fit India Movement’ initiated by Ministry of Sports & Youth Affairs and to remain fit besides maintaining a pollution free environment. He lauded the Itanagar Smart City Corporation and Capital Administration for organizing the Walkathon and Cyclothon events which is directed towards fitness, health and hygiene. He further said to promote it by practicing in our daily lives. He further called to walk or cycle towards fulfilling our duties as a responsible citizen.

He further called to guide the younger generations in right path and exhorted to engage them in positive and meaningful activities. He lauded the State Police Department, the civil administration and the State Narcotic Cells for their fight against drugs addiction and called upon all sections of the society to join hands to make our State and the Society, a drug free State. 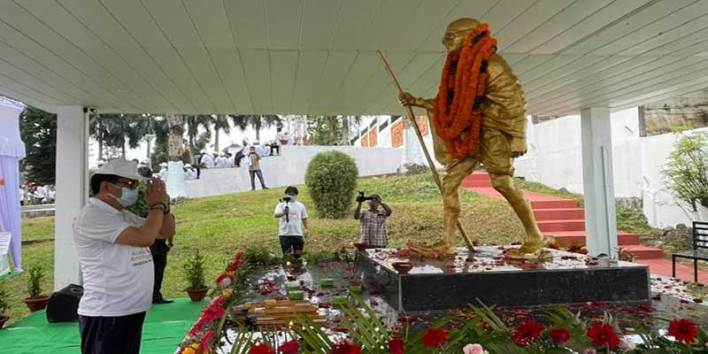 Earlier, Deputy Chief Minister flagged off the Cyclothon and Walkathon events from the tri-junction near Gandhi Park at Niti Vihar and also paid floral tributes to the Father of Nation along with hosts of Ministers and MLAs.

He also gave away prizes to the winners of Walkathon and Cyclothon events at the valedictory function at DK Convention Hall, Itanagar.

About 50 Cyclists and hundreds of students participated in the Cyclothon and Walkathon events organized by the Itanagar Smart City Corporation in collaboration with the District Administration, Itanagar Capital Complex with the theme ‘Freedom to Walk & Cycle’ to mark the celebration of 152nd Birth Anniversary of Mahatma Gandhi.