Interacting with media persons Raksha Rajya Mantri said “ I have interacted with our Jawans in forward locations today, their spirit is very high”.

RRM Ajay Bhatt further appreciated the Civil-Military relation in Tawang, and called it an example in the entire country.

Wherever there is Indian army, they always keep good relation with civil population and always extend their helping hands when ever needed. The local population and Army combine makes a beautiful bouquet of flower, they should cooperate each other in developmental activities. 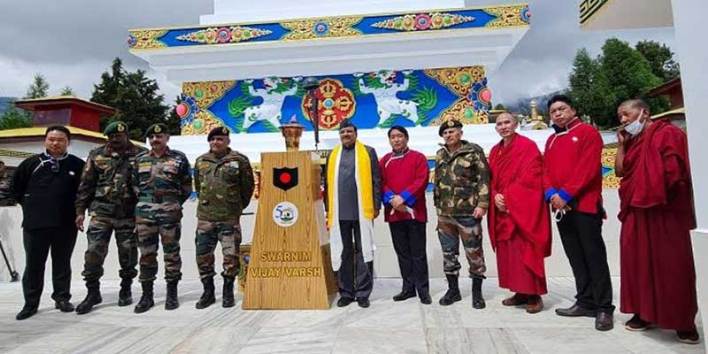 Interacting with the NCC cadets the Minister said “ You should be ready to serve your nation, future of this country lies on your shoulder” and he further encouraged the NCC cadets to join Indian Army.

Tsering Tashi,  MLA  of Tawang briefed the Raksha Rajya Mantri and GOC Eastern Command on joint land re-assessment and further follow up of the meeting that was held yesterday in the conference hall of DC Tawang chaired by Chief Minister regarding the same.

Earlier Raksha Rajya Mantri along with Senior officers from Indian Army paid their tribute to the martyrs at Jaswant Garh and Bumla.