BANDERDEVA-   The Police Commemoration Day was observed in a benefitting manner at Parade Ground of Police Training Centre here at Banderdeva today with the rest of the country.

Every year, the country celebrates the Commemoration Day to mark the heroic efforts, patriotism and devotion of the police personnel who sacrificed their lives while discharging their duties.

The day remembers the sacrifices of ten policemen who breathed their last in Chinese firing in 1959. On October 21, 1959, Chinese troops opened fire and threw grenades at twenty Indian soldiers in Ladakh.

Ten of the police officials attained martyrdom and seven sustained injuries. On November 28, 1959, the Chinese troops handed over the dead bodies of the martyred policemen to India. They were cremated with full police honors at the Hot springs in North Eastern Ladakh.

Chukhu Apa, IGP, Arunachal Police  while paying rich tribute to martyrs and their families for their supreme sacrifice read out the names of Officers and men who laid down their lives on duty between 1st September ‘2020 to 31st August’2021 of the county.

Later, on the senior Police officers and representative of all ranks of Arunachal Pradesh Police offered wreath to the Martyrs memorial along with the IPS.

All Rank and file of state police and all officers of PTC were present in the on the occasion. 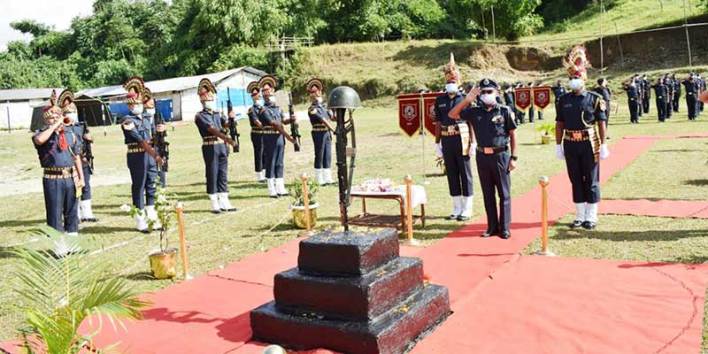 12 NDRF  also observed ‘Police Commemoration Day’ by remembering martyrs at 12 NDRF Headquarter in Itanagar camped at Doimukh.  Commandant  Rajesh Thakur along with officers of the unit paid tribute to all police personnel who have sacrificed their lives to the service of Nation.  On the occasion, all personnel of 12 NDRF observed 02 minute silence with due solemnity in memory of our martyred. Shok Shastra parade, guard of honour, laying of wreaths and paying of floral tributes were performed in their respect.

In speech, Sh. Rajesh Thakur, Commandant, 12 NDRF Itanagar read out the names of policemen martyred on duty, including one NDRF personnel (Late) ASI/GD N. Binoy Meitei, who laid down his life during forest fire dousing operation in Dzukou Valley (Manipur & Nagaland) border on 05/01/2021.  He ended his speech after paying tribute to all 377 martyred last year.