Established fifty years ago in 1972 as a primary school is today a middle school imparting formal education not only to children of the Tibetan settlers but also of local communities residing nearby.

Tenzing Gang is one of the three official settlements for the Tibetans in Arunachal Pradesh. The other two settlements are in Tezu (Lohit) and Miao (Changlang).

Congratulating the students, alumni, faculty and residents of the area on the glorious fifty years of the school, Khandu appreciated the school management for rendering yeoman service of imparting quality education and producing bright students, who are today contributing in the country’s growth.

“This is indeed an incredible journey of Sambhota Tibetan School since 1972. The institution is doing great work, especially focusing on education of girls, the Tibetan community and local Arunachalis,” he said. 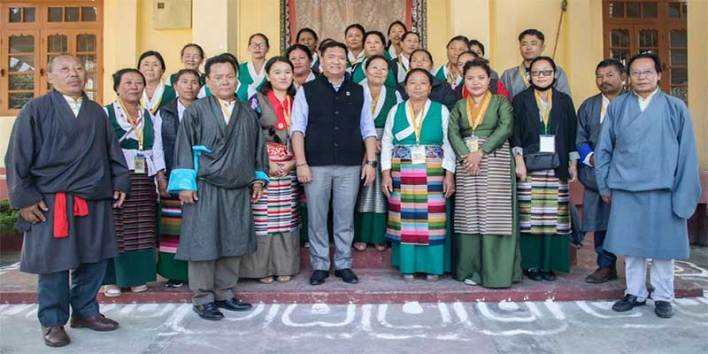 Khandu hailed the Tibetans, who despite being settled in a different country, have maintained utmost cordial relationship with local indigenous communities while preserving their rich Buddhist culture, tradition and language.

He said, “I make a point to visit the Tibetan settlements whenever on tour. I have visited both the settlements in Eastern Arunachal and found that the indigenous communities around these settlements have in fact benefitted from the Tibetans.

Khandu explained that local Arunachalee people have learnt so much from the Tibetan settlers in practicing and keeping alive their traditional textile and handloom, their language and their rich culture.

The Chief Minister, for the umpteenth time, beckoned indigenous communities of the state to pass on their respective culture, traditions and language to the next generation. He said the state government is committed to preserve the rich cultural heritage of each indigenous community of the state but asserted that the responsibility lies more on today’s generation of elders, seniors and parents.

He conveyed the same message to the Tibetans, who are today spread and settled across the world.

Referring to a message from the Dalai Lama, which was read out earlier, Khandu reiterated teaching human values to students along with formal education – essence of Dalai Lama’s message.

“I would like to reiterate His Holiness Dalai Lama’s message that our focus should be on inculcating compassion and human values in our children. And also teach them about the significance of our environment, climate and our planet,” he said.

Responding to submissions made by the Headmaster of the school and residents of nearby Domkho village, Khandu assured the state government will do everything necessary for the school and the area and asked the district administration to study and submit proposals officially to the government.

Earlier, on arrival at the Tenzing Gang Monastery, Khandu felicitated its abbot His Eminence Sharpa Choeje Rinpoche and sought his blessings for development of Arunachal Pradesh and prosperity of the people.

He also visited the kindergarten section of Sambhota Tibetan School and spent quality time with the kids.

The golden jubilee celebration was also attended by local legislator D W Kharma and Dirang legislator Phurpa Tsering along with others.